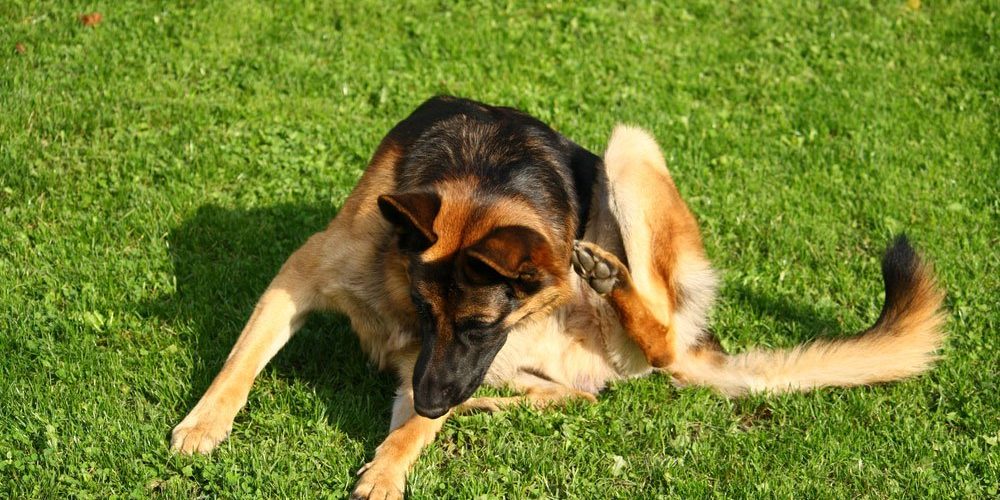 German Shepherds can suffer from any number of common skin problems, often lumped under the title ‘Pyoderma’, which is technically a skin infection. Those infections are usually the result of a bacteria (often some kind of staphylococcus).

The infection can be limited primarily to the outer skin layer, or may penetrate deeper into the subcutaneous levels. In extreme cases, the infection actually occurs under the skin and spreads upward. The result is usually some kind of lesion resulting in a hot spot.

Hot spots are a common and easily recognizable problem that are associated with Pyoderma. They appear as red, moist and often itchy spots where hair has been lost or scraped away.

The severity of a hot spot can vary depending as much on location as any other cause. Treatment with Neomycin or other common antibiotics is relatively simple and the sore can heal within a few days if left undisturbed. But the challenge is to keep the dog from continuing to irritate the wound by scratching, rolling or other mechanical scraping.

If it occurs on a foot or leg, a simple gauze wrap, held in place by vet wrap is usually effective. ‘Vet wrap’ is a 3M product, a type of breathable, elastic bandage that comes in various thicknesses. It’s not adhesive but does stick to itself partially. Securing the gauze/vet wrap by white medical tape is quick, easy and sure.

For hot spots in other areas, such as the neck or back, it may be helpful to find a big t-shirt to pull over the dog. Sometimes, it’s necessary to bind socks onto the dog’s feet with velcro straps. In extreme cases, a plastic cone collar (or other style) is needed to prevent scratching the affected area.

Skin problems can occur for reasons other than bacterial infection. Often they’re the result of diet. Many German Shepherds are sensitive to wheat in their food, a main ingredient of many commercial dog foods.

Dogs are carnivores by nature. Their stomachs are relatively straight, making it more difficult for them to digest vegetable matter. It takes longer for that material to break down, which is why humans and other omnivores have evolved very long, convoluted digestive tracts. Their ancestors might ingest some plant matter while feeding on the stomach of prey, but the amount was already partially pre-digested and/or a small portion of the total.

Sensitivity to wheat, corn and other plants can manifest itself as itchy skin. The dog scratches the itch and, voila, a hot spot. Treatment is the same as above, with one additional step needed: changing the diet.

Even though the initial problem isn’t bacterial, once the wound is created, antibiotics are needed to prevent infection. Keeping it gauze/vet wrap wrapped is important for healing. But at the same time, the dog’s diet should be changed. Consider an all meat diet, or at least change dog food brands. Not all use the same proportion of ingredients.