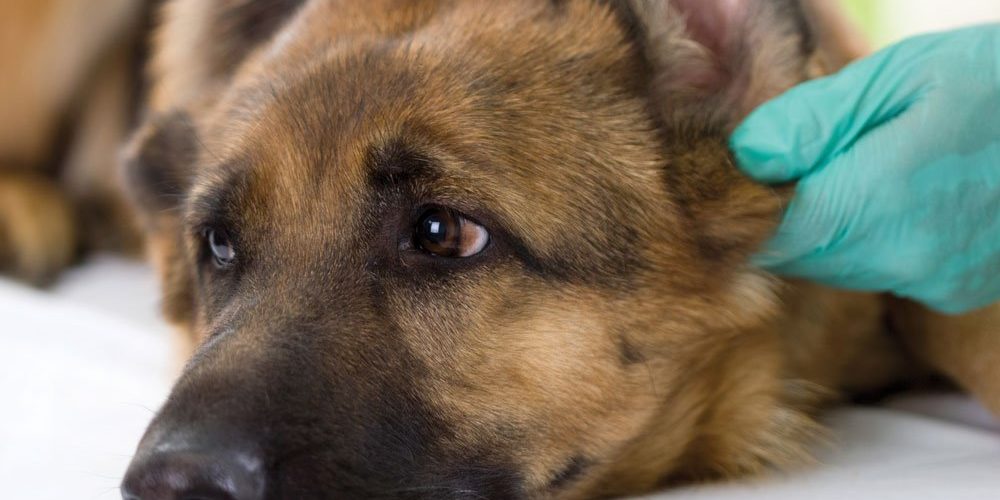 German Shepherds by and large are very healthy, no more prone to illness than any other breed and healthier than many. But there are certain conditions that tend to occur among some breeds more often than others. Ear inflammations are a case in point.

As a long-eared breed a condition called Otitis Externa, an inflammation of the outer ear canal, occurs in about 20% of individuals from time to time. There are a dozen different possible causes.

Some German Shepherds are sensitive to wheat or corn in their diet, which is a common ingredient in many commercial dog foods. The resulting sensitivity can prompt an allergic reaction that manifests itself, in one way, as Otitis Externa.

But even simple ‘mechanical’ things can encourage ear inflammations. Water retained from a bath is one possibility. Even though Shepherds will shake their head vigorously, some water can stay inside the canal. Occasional treatment with a half and half mixture of 5% vinegar and water can help prevent that.

Hair trapped in the canal, from shedding or scratching, can create blockage and provide a medium for bacterial growth. Wax can do the same. In either case, keeping the ear canal free of material will help encourage good air flow which assists in keeping ears dry and germ free.

Those germs can take a number of forms. Ear infections are caused variously by fungus, bacteria or parasites. The parasites themselves don’t usually do the major damage, but they carry bacteria and viruses that are injected when they feed. Ear mites are responsible for about 10% of cases.

In rare cases, the cause can be the result of an autoimmune system disorder. With poor breeding programs, that rely too much on too-closely related individuals, the odds of that go up substantially. Endocrine (hormone) imbalances can occur, allergies are more likely.

Sometimes the cause is a simple case of overactive sebaceous glands. The exudate (the material released) clogs pores and that can lead to an inflammation.

Apart from the simple care routines described above, only a vet can determine if more serious treatments are needed. Cytology (sample cell examination under a microscope) can identify bacteria, yeast, parasites and other causes too small to see with the naked eye.

Many dogs will use their claws and paws to scratch an itch. They’ll scrape their heads across the carpet or grass. Eliminating all of that behavior is virtually impossible. But when it becomes regular, you should examine the ears for possible problems. Depending on what they have trapped in their nails or are picking up from the ground, they may well be causing the very problem they’re trying to treat themselves. Soil often contains harmful bacteria.

Keeping up with regular cleaning with vinegar or Nolva Cleanse solution will eliminate most problems before they occur. Trimming hair at the base of the ear is a good preventative, provided you don’t cut too close to the skin and cause ingrown hairs. When that’s not enough, seek out your local vet.