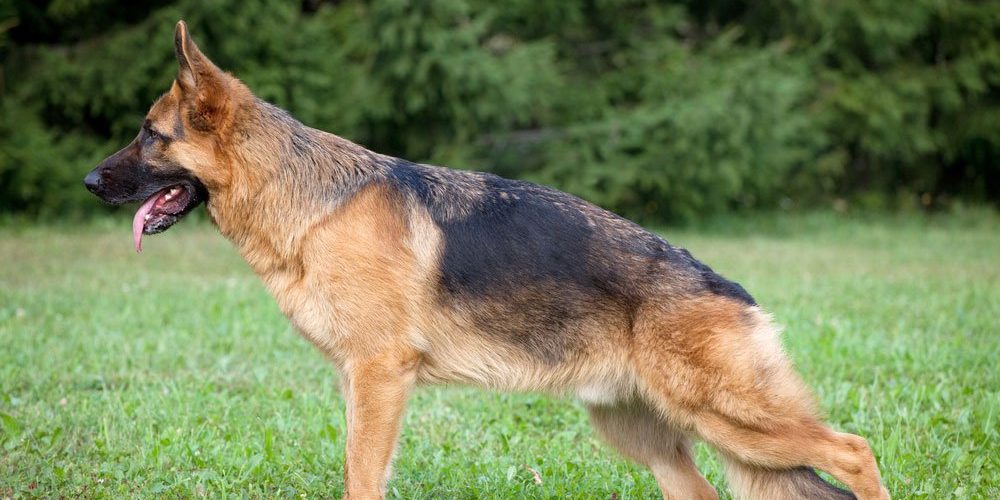 The German Shepherd is currently listed as the third most popular dog breed registered with the AKC.  This dog resembles that of its ancestor, the Wolf, and was originally bred to be the ideal hurting Shepherd and guard dog.

Although this breed went through several name changes during World War I, mainly due to its German heritage, it was officially renamed the German Shepherd and recognized by the AKC in 1931. And while its popularity ranking is down just a bit, it has been a top choice as a family companion for generations.

German Shepherds score very high in terms of protection ability, watchdog status, and training adaptability.  Although playfulness and affection does not rank as high as other dog breeds, the German Shepherd is actually a perfect choice for a family pet.

This dog is extremely protective of its home, as well as members of the family. He is considered aloof and a bit suspicious towards strange people and other animals.  However, they can be tamed and gentle around children and other house pets.

As far as upkeep is concerned, German Shepherds need mental and physical challenges on a daily basis.  With the ability to learn new tricks and obedience lessons, this dog is extremely intelligent.  Physical activity must also be a part of this dog’s daily life.  Long walks and running outside is ideal.

What it comes to health issues, there are two concerns that you need to know about: CHD and elbow dysplasia.  Minor health concerns which occasionally strike the German Shepherd are skin allergies, hemangiosarcoma, malignant neoplasms, cataracts, elbow dysplasia, degenerative myelopathy, gastric torsion, and hot spots.

The lifespan of the average healthy German Shepherd is anywhere between 10 and 12 years.  This is based on a dog who remains healthy and is active throughout its lifetime.  Specific health tests suggested by veterinarians for German Shepherds are elbow dysplasia and hip dysplasia.