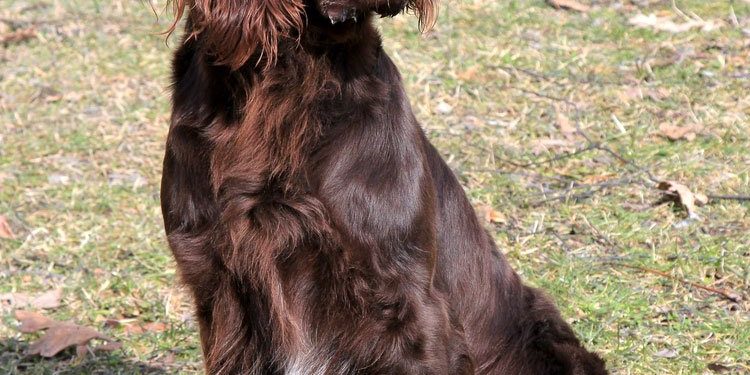 The Field Spaniel is one dog breed that actually shares much of its early history with a similar breed called the English Cocker Spaniel.  Initially, the only difference between these two dogs was their size. The Field Spaniel was a bit larger due to its blood connection with Land Spaniels that weighed as much as 25 pounds heavier. These larger Spaniels were made up of the Sussex, Cocker, and English Water Spaniels.

By the late 1800s, after they were recognized as their own separate breed, heavy breeding practices went into the Field Spaniel which resulted in a longer body, shorter legs, and heavier bones.  Such exaggerated breeding techniques caused this dog to lose its hunting abilities and although Field Spaniels were quite popular going into the early 1900s, they teetered on the brink of extinction soon after.

Fortunately, breeders started to cross the Field Spaniel with English Springer Spaniels in order to re-create the original breed. They were successful. Today’s modern Field Spaniel is not only a wonderful looking dog from the old days, they also regained their hunting abilities.

You can thank the following groups of people who undertook the challenge of re-creating the original Field Spaniel, dating back to the 1950s: Gormac Teal, Ronayne Regal, Elmbury Morwena of Rhiwlas, and Colombina of Teffont.

Although the Field Spaniel was introduced to the United States sometime during the latter part of the 1800s, there were no champion dogs from this breed between the years 1916 and 1966. In fact, there were almost no Field Spaniels to be found in America during this time. However, during the late 1960s, this dog started to become more popular but is still considered one of the rarest breeds in existence today.

With high energy levels and equal amounts of playfulness, the Field Spaniel is one of the most friendly breed of dogs that a family can have and are noted as being extremely friendly towards and other pets.  They are easy to train and can be excellent watchdogs. Always willing to please, and enjoy having a job to do, a Field Spaniel would make any home a peaceful one.

Taking Care Of Your Field Spaniel

Although Field Spaniels are fairly active dogs and enjoy running around as much as possible, you can satisfy its energy requirements with a couple of brisk walks during the day. Most happy when sleeping inside with its family, Field Spaniels should also have plenty of time to roam free in a fenced-in yard. Grooming will take solid brushing at least twice per week and the hair of the ears and footpaths should be trimmed up every few months.

The lifespan of the average Field Spaniel dog is approximately 13 years, with some lasting up to 15 years. Considered to be one of the most healthiest dog breeds, there is little in the way of health concerns. The only major issue is CHD and the only two minor health concerns are hypothyroidism and otitis externa. Every Field Spaniel should be tested specifically for thyroid problems, hip and elbow dysplasia, eye issues, and heart murmurs.