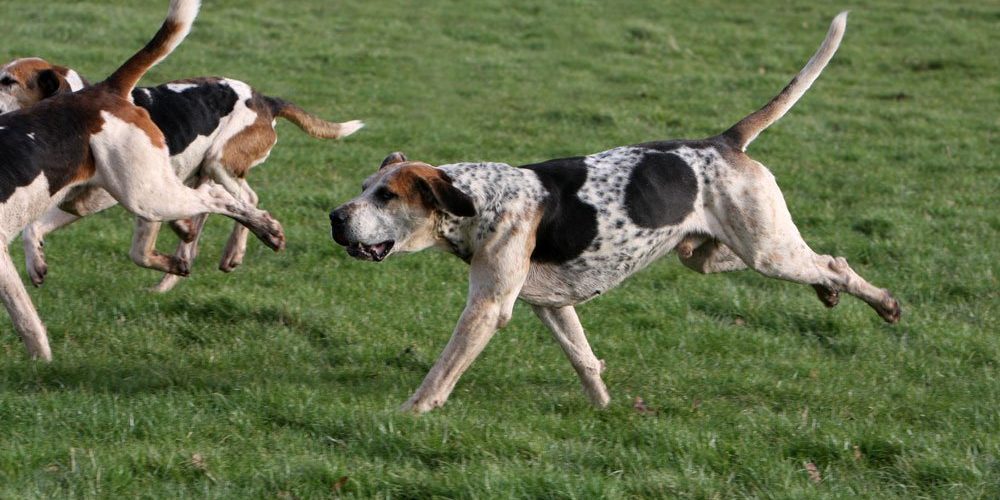 The English Foxhound is a bit more stout in physical appearance than its counterpart, the American Foxhound. Although the exact origin of this breed is unknown, we do know that particular pedigrees were kept of English Foxhounds since the 1700s.  This is longer than any other dog breed.

Fox hunting was a sport that became very popular with the the upper class and a small group of men had a vision of creating a dog that could hunt and kill fox, track a scent from miles away, and have the speed and agility to maintain long-distance running when chasing its prey.  In fact, these chases could go on for hours if necessary.

Fox hunting was such a sought-after sport that breeders wanted their Foxhounds to not only perform well when being watched to hunt, they also wanted the dogs to look beautiful, especially when running in packs. Such breeding took place to ensure that specific pack members would have the same color coat, which was usually black saddle over a tan colored body, and white points.

To give you an idea of just how popular fox hunting became, by the late 1800s there were 140 individual packs of English Foxhounds specifically created for the sport.  Each of these packs contained approximately 50 hounds and all were officially registered in England.

English Foxhounds started to make their way to the United States sometime during the 1700s.  It was during this time when they were bred with other strains to produce more streamlined physical characteristics and eventually were turned into a second Foxhound, known as the American Foxhound.  However, the English Foxhound is still the number one choice for hunters who desire the traditional hunt when on horseback.

English Foxhounds have an extraordinarily friendly temperament towards both dogs and strangers. They make excellent watchdogs, have high energy levels, and make perfect house pets. This animal requires constant social interaction and will get lonely fast if kept by itself without contact with people or other canines. This is one dog that will get along with just about everybody and everything, including horses and other pets. It is also noted that English Foxhounds are best when raised with plenty of land in country areas to roam around. City dwelling is not meant for this dog.

Taking Care Of Your English Foxhound

There is not much work required for upkeep and maintenance of the English Foxhound. This dog is clean and has minimal grooming needs, just the occasional brushing.  It can live outdoors in either cold or warm temperatures, so long as there is plenty of shade and warm bedding. The one particular detail you should be aware of is that the English Foxhound is genetically designed to run long distances and hunt for hours on end.  Therefore, he will need plenty of daily exercise for brisk walks or long jogs with its owner.

Just like the American Foxhound, the English Foxhound has absolutely no health problems to worry about.  Most dog breeds can be expected to show signs of either one or more specific diseases, but due to its pure bloodline and genetic heritage, this dog has no major or minor health issues.  The lifespan of the English Foxhound can last up to 15 years, with 11 to 12 being the average.