Dogs Training – Training Your Dog Not To Bite 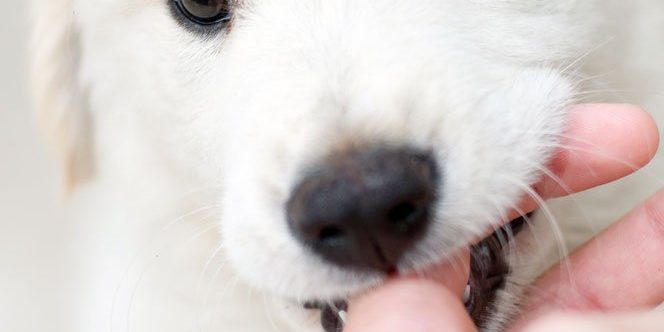 According to the CDC (Center for Disease Control), dogs bite more than 4.7 million people per year. Law suits, medical bills and sometimes dog euthanasia are common results from this unwanted – and often avoidable – behavior.

As with any dog training issue, how easy or difficult it is to train a dog not to bite will vary with the breed, age and individual temperament of the dog. But there are some common techniques that will usually help suppress biting behavior.

Wherever possible, start young. Puppies have a natural inclination to mouth and nip. Though it’s often encouraged by owners who understandably see the behavior as cute, human restraint is a prerequisite to dog restraint. Good – and bad –  habits start young.

Beyond about the age of four weeks, puppies can begin to learn simple commands. When the puppy moves his mouth to bite, a gentle, but firm ‘No!’ followed by a slight squeeze of the muzzle can help.

Be careful not to cause the puppy to bite its tongue, though. Be especially careful not to squeeze hard or too high up on the muzzle. Dogs have sensitive and delicate odor receptors high up inside the nose. You never want to damage a dog’s ability to smell.

The squeeze isn’t to punish, but to inform. The goal is to help the young dog associate the verbal command with something it can understand at that age – discomfort. Most dogs naturally dislike having their muzzles squeezed at any age.

Along with verbal discouragement and gentle physical restraint or reminders, socializing your dog – as young and often as possible – can help develop calm and confident dogs. Fearful dogs, not used to strangers (whether human or animal), are much more prone to biting behavior.

Expose the dog to other (non-aggressive) dogs. Differences in smell and looks are triggers that can cause dogs to become wary. Introducing them to variety at a young age can help discourage this territorial response.

Most dogs will naturally inhibit biting when playing with litter mates. They nip, but learn early not to press hard. Take advantage of this by ‘widening’ the pack to include family members, other pets and frequent visitors.

Restrain your pet at first when introducing animals from other households. Restrain the other animal as well. Let them approach slowly and sniff or carry out other natural behavior.

Look for body tension, snarling, erect ears and other indicators of oncoming aggression. Make the dog sit, stroke its back and put out your hand to the other animal then convey the smell to your pet. Then allow them to interact.

Dogs normally learn bite inhibition by four and a half months, but don’t be discouraged if it doesn’t happen that quickly. Breeds vary and so do individuals. Older dogs, ones not trained early to suppress biting or not socialized, will naturally be harder to train.

Some dogs will never be fully trained not to want to bite. Part of training involves training people, too. Make sure any such dog is unable to reach other people or animals. And, make sure that people are informed not to try to interact with the dog.

Gradual, persistent, patient training will usually pay off in a calmer, more playful pet. Which, despite the effort involved, is better than paying off lawsuits.