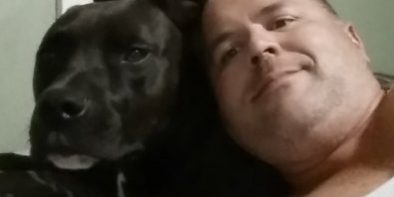 DogFest is Baltimore Humane Society’s largest fundraiser of the year which attracts thousands of animal lovers, kids, and dogs.  The festival includes a one mile walk on their wildlife sanctuary with supporters who have raised money for the no-kill shelter’s animals.

Sadly, Jason Webster unexpectedly passed away on Thursday, July 7th.  He was thirty-eight years old and died of a heart attack.  Jason’s love for his dog, Santana, was known by all who knew him.  He recently moved into a new home, extremely happy that his beloved pet would have a large yard to run and play in.  He had installed a swimming pool for Santana and was working on the yard fence posts the day before he passed away.

Jason is described as a selfless person who always came to help anyone in need.  For the past several years he was a supporter of Baltimore Humane Society’s Dogfest Walk.  Baltimore Humane Society is dedicating the 2016 DogFest Walk to honor Jason’s memory and loyal support.  Through his efforts countless homeless pets have been helped.

Last month Webster started his fundraising campaign with a goal of $500 to raise funds for the animals. His family is requesting the community help them reach and surpass Jason’s goal by making a donation and then continuing to pass the form around by copying and pasting the link to post online or forward by email.  They are also requesting that people also pay their respects by registering and joining the walk the day of DogFest on September 17.

If you cannot walk, but would like to donate in Jason’s memory, you can make your donation at DogFest.org by clicking on the Jason Webster Memorial link.