Dog Training – Your Dog Around Horses 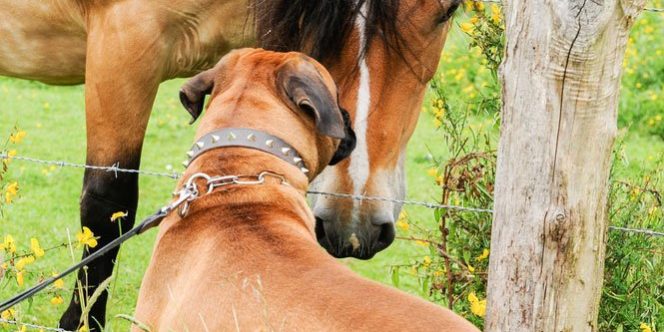 You’ve undoubtedly noticed that your dog is much smaller than a horse. (Well, most are anyway.) Nevertheless, most horses are much more frightened of dogs than the reverse. That creates unique problems – for dog, horse and the person who has to govern both.

In this case, unlike other animal training areas, it helps very little to start the interaction out when both animals are young. Young horses are at least as skittish as older ones, and are often accompanied by a mare. Neither is naturally fond of nor curious about puppies. To a horse, nearly everything but their owners and a few other horses are threats – at least until they’re mature.

But there are many circumstances where dogs and horses interact successfully. Whether the dog owner is a regular visitor to barns or riding schools, or whether the dog lives on the premises both can get along well.

Always keep puppies restrained around horses until they’ve learned what to do and what to avoid. A leash, for at least the first several weeks of training, is essential. And ensure that the horse is not in a position to rear or run where the dog can be injured.

Training a dog around horses involves a series of separate, but easily learned behaviors.

First, the dog has to learn to respect a boundary – whether a paddock with metal bars a dog can easily slip through, or a series of stalls, or other enclosure. Begin by using a leash and collar and make the boundary training part of a more general walk where you train the dog to follow you. Follow you, not lead you.

As the dog approaches the boundary, its sense of smell will cause it naturally to be curious about the horse. Allow the dog to approach – but not move beyond – the boundary. If it tries to breach the boundary, tug on the leash and give a sharp ‘No!’ or ‘Stop’. (‘Stay’ is a different behavior, requiring a different – and unique – command.)

Next, simultaneously really, any tendency to bark needs to be suppressed. Barking frequency varies with breed and individual temperament, but horses aren’t discriminating. When seemingly threatened, they react – and a horse’s reaction to barking is not usually something pleasant.

Dogs, like horses, are pack animals and will usually follow the lead of the alpha (leader). Unless, they’re trying to be the alpha. This drive for dominance, coupled sometimes with fear or simply the desire to warn of a threat, can lead to barking.

Reinforce your ‘top dog’ status, by a sharp jerk sideways on the leash, accompanied by a sharp verbal ‘No bark!’. Jerk sideways, not back, in order to get the dog’s attention without risking injury to the throat. Dogs have very strong neck muscles, but throats can still be too easily bruised by excessive force.

If the dog insists on barking, remove him from the area and try again another day. Don’t give up too easily, though. You don’t want to train the dog that every time he barks ‘Danger’, you obey by fleeing.

As with any dog training regimen, patience and consistency are the keys to success. Be firm, but not abusive, and execute the same unique command and physical movement regularly for each associated behavior taught.