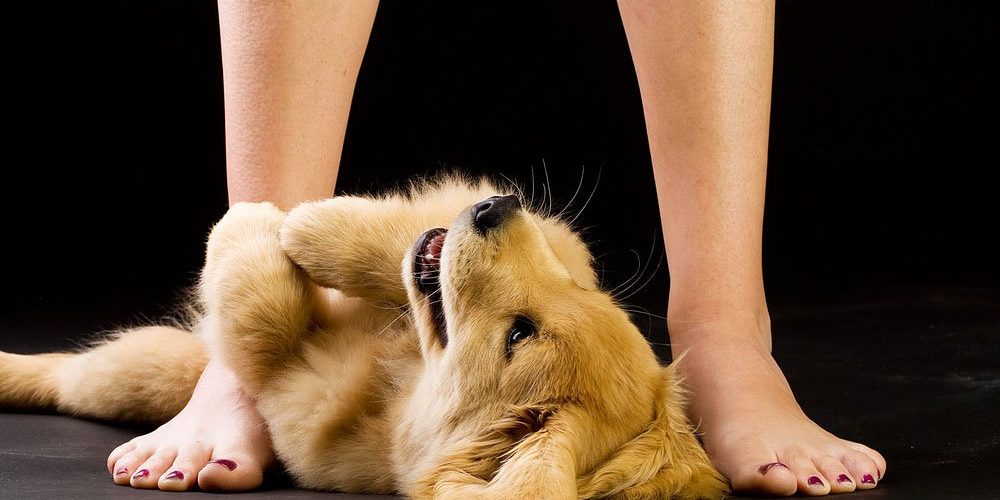 As descendants from wolf packs, dogs have and seek a natural hierarchy in which some are dominant (alphas) and others follow. Struggles among young pups to sort of who is which start early, in some cases three weeks after birth.

Apart from human society, wild dogs will fight – sometimes to the death – to maintain or achieve the alpha status. Losers are occasionally expelled from the pack entirely.

But in any human-dog pair the human has to take the leader role. The alternative is property destruction, human frustration and usually a maladjusted dog. Naturally, that’s sometimes easier said than done.

Pups display early in life the tendency to want to lead or acceptance of a subsidiary role. For those who insist on being alpha, several techniques can help adjust the dog’s behavior. But first you have to identify it.

Put the pup on its back with a firm hand placed in the middle of the chest. No need to press hard, just enough to keep the dog from wiggling away. Monitor the strength and length of time the dog takes to submit, signaled by pulled back paws, averted eyes, and general relaxing.

Most individuals will struggle at the unfamiliar position and submissive role. The strength of the struggle and the length to relaxation will vary from breed to breed – Golden Retrievers may submit relatively quickly, where terriers may never stop struggling.

Dogs learn by cue and repetition so to assist curing excessive assertiveness lean your face close to the dog’s and growl, bark or even shout when required. Don’t expect completely satisfactory results the first few times, but gradually most will learn to accept their secondary role.

A variation has the person stand or kneel in front of the dog, then lift it at the chest using one or two hands. Most dogs, especially dominant ones, dislike this but they quickly learn who’s the boss. Alternatively, grasp both front paws and lift up. Don’t be too aggressive. The goal is to encourage acceptance of their role, not to punish.

For those inclined to leap up on people, there are several useful techniques.

First, try to distinguish between dominance and the desire for affection. Many dogs leap in order to get closer to the human face. Dogs that height have eyes that see at that level. Eye contact and face rubbing is used by them to encourage bonding and establish social roles. They may just be trying to communicate. Kneel down and allow non-biters to get close to the face.

Maintain enough eye contact to establish dominance by waiting for them to look away. Try not to blink. When the dog accepts its role, praise lavishly with ear rubs and leaning your forehead into the dog’s head. Keep your head higher until your role is well-established.

For those who need extra discouragement, try the following.

Watch the dog’s face and body carefully for tell-tale signs signaling an imminent jump. Discourage the behavior with voice commands (‘stay’ or ‘down’) and a palm thrust out and down into the dog’s face. If they’re already in mid-flight, raise a knee slightly into the dog’s chest. To keep them off and put them off-balance, NOT to pummel the dog or throw it backwards, except in emergencies.