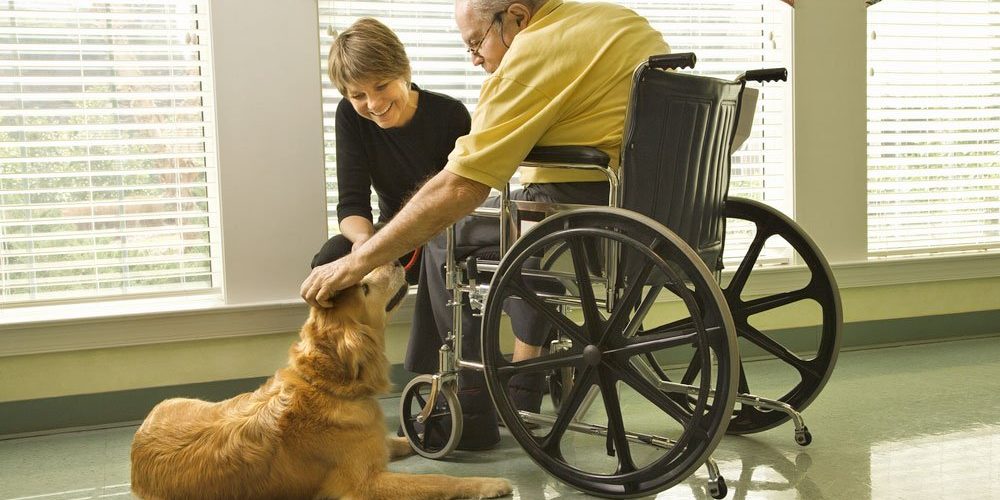 It’s no accident that some breeds are more commonly found as working dogs. Retrievers, Shepherds and a few others tend to have the physical characteristics, intelligence and temperament needed to perform the complex behaviors even they need several years to master.

Specialized training for service, assistance or even therapy dogs begins before birth and continues for several years after.

After the pups have matured a few weeks to a few months, selector-trainers run a series of tests to determine stamina, aptitude and overall personality. Candidates first receive a thorough physical to check for diseases or potentially debilitating conditions such as hip dysplaysia or weak joints. Then come the personality tests.

Dogs are social animals with a natural hierarchy. Through in-built characteristics and early circumstances they take on varying roles from alpha (leader) to beta (second in command) to omega (submissive, sometimes on the periphery of the pack).

In any human-dog pair, the human must always take the alpha role, but service dogs still need to have a fair amount of assertiveness to perform their duties. A common indicator for this is the dominance-submission test.

Puppies six to twelve weeks old are placed on their backs and the evaluator places a hand on its chest. They observe to what degree the puppy protests being placed in that submissive, vulnerable position and how long the dog struggles before pulling back its paws and tilting its head to indicate surrender.

Variations involve having the dog stand on all four with the evaluator in front. The person then lifts the dog by the chest and monitors how much the dog struggles and for how long.

Dogs that are too assertive may never make suitable working dogs since they’ll tend to ignore commands. Dogs that are too passive will also be poor candidates, since they need the confidence to take on the role of guide, rescuer or some other requiring some initiative and risk-taking.

Working dogs are often placed in noisy, potentially distracting environments. The average canine would react fearfully or playfully to all the stimulus, but working dogs need to focus on a task.

To test for the dog’s potential, evaluators clap hands in front of the face or near the ears, bang pots together, rattle chains and so on. Preferred candidates will exhibit a curious sniff. Frightened running and hiding or excessive barking flunks the dog before they pass freshman class.

Many working dogs have to deal with a variety of objects large and small that others might find intimidating. Be they moving cars and equipment or simply coat racks, curiosity signaled by approach and sniffing followed by acceptance is needed. Fear of the unknown puts them out of the working dog category.

Service dogs need to ford rivers, open doors, hurdle obstacles, herd sheep or cattle and be on the go for long periods. Some breeds and individual dogs naturally have a higher capacity and even eagerness for long periods of activity. Testing the dog’s reaction to or willingness to surmount a board or pole is just the first test among many to test for stamina.

The most essential characteristic for any working dog is the desire to work. Like humans, individual dogs vary in their eagerness to carry out assigned tasks. A variety of exercises test the intelligence and willingness to jump an obstacle, retrieve an object, return on command, focus on a task and so forth.

Dogs that are quick to learn and eager to please demonstrate the motivation to take on the complex roles performed by service dogs.