You are here:
Dog Training AidsDogsTraining 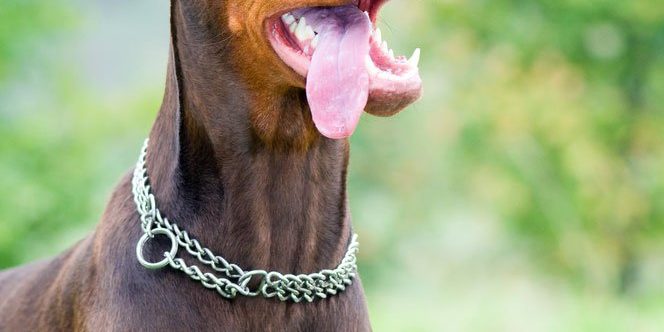 Sometimes the distinction between training and control is too easily lost. Using commands and hand gestures, with leashes or treats, to solicit desired behavior is training. Using choke or ‘no-bark’ collars, electronic fences and similar devices is for control.

Control isn’t necessarily a bad thing. Dogs naturally have and seek a social hierarchy in which one is the alpha (leader) and in any human-dog pair the human has to take that role. The alternative is property destruction, unsafe conditions for dogs and humans, human frustration and a maladjusted dog.

Choke collars were invented to assist in gaining control. Dogs, like humans, are individuals. Some are naturally more assertive or slower to learn. For ones that don’t respond to a normal leather or nylon collar, a metal choke collar can provide extra discouragement from pulling and leaping.

The potential downside is that, used improperly – all too easy to do – they can be counter-productive and even dangerous. Choke collars fit only one way and when fitted should allow from one to three fingers gap between the neck and the collar. Three for larger dogs, one for smaller. Generally a collar two inches longer than the neck circumference will do.

Used improperly, though, choke collars can pinch the skin – producing hot spots that scratching will make worse. They can also accidentally compress the trachea. An instantaneous pull-and-release isn’t harmful, though by design produces discomfort, but for dogs that tend to pull against the leash this movement is difficult to do. Generally not recommended, especially for smaller dogs.

Prong collars are less dangerous than they appear, but – in this trainer’s view – have almost no positive characteristics. The only good aspect of the design is their limited diameter – they can only close down so far. However, an animal with such a strong tendency to pull that prongs look attractive needs more than a quick fix consisting of choking and poking. That animal needs committed attention and behavior modification training.

Halter collars, which wrap around the neck and the muzzle, but don’t prevent panting or impair drinking can give extra control. The downside is, since they don’t restrict biting or grasping, half their potential value is gone. An ordinary leash and collar, or even a chest halter might be preferable.

‘No-bark’ collars can sometimes help with those animals that persist in barking long after the initial impetus is gone. Barking is a natural response to potential threats and is also used to attract attention when one becomes separated from the pack. But, for reasons not well understood, some individuals continue barking for long periods or at the slightest provocation.

Shock collars generate a short but painful electric shock that can be repeated and lengthy during prolonged or persistent barking. Objective tests of their effectiveness show varied results, though. As with prong collars, any dog needing one would benefit more from careful, professional help.

Sometimes quick fixes are tempting and useful… until they become substitutes for more beneficial (both to trainer and dog) long-term training. Taking the time to learn to get your dog’s attention and compliance without excessive reliance on control devices is preferred. The results are saner trainers and happier dogs.