Dog Training – No, YOU Down! 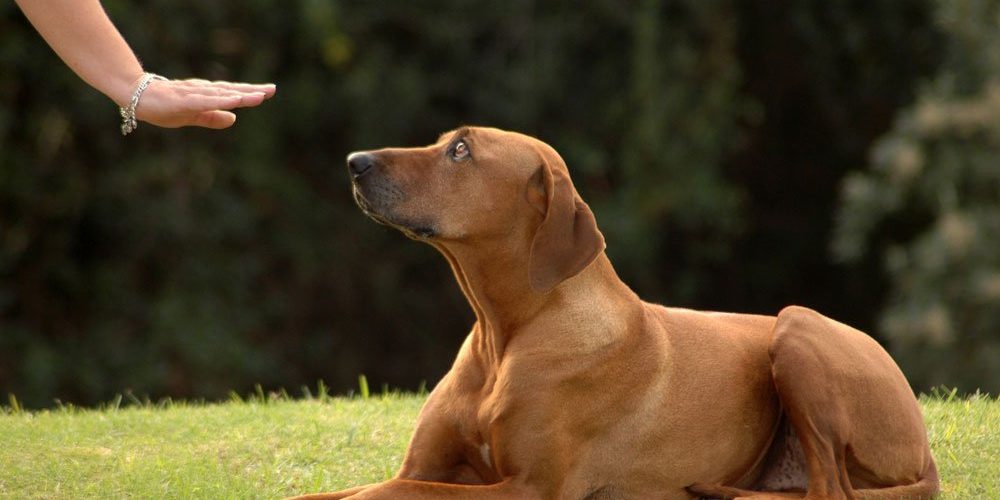 ‘Nature to be commanded, must be obeyed’ said Francis Bacon. Nowhere more true than dog training. Dogs have a natural tendency to seek and adhere to a hierarchy with an alpha (leader) at the top on down to an omega at the bottom. ‘Down’ is one effective technique for enforcing your alpha status.

It also has practical benefits. When a dog is in the ‘down’ position, it isn’t knocking over the furniture or small children. It also leads naturally to subsequent behaviors such as ‘rollover’, ‘crawl’ and other keen tricks.

Fortunately, the behavior is usually very easy to train. Take advantage of spontaneous behavior whenever possible, by observing the dog and waiting for a movement from standing or sitting to down.

When you see it occurring, execute a unique voice command and hand gesture pair. Every behavior should be associated with a unique hand gesture, not used spontaneously during the day, as well as a clear, precise word and tone.

After the command when the behavior is complete, praise lavishly. At first, the dog will have no idea why it’s being praised. It doesn’t matter. With repetition the behavior will follow the command. It’s results you’re after.

Most dogs won’t perform the desired behavior on command the first few times. Be patient and clear and consistent. As with all training, minimize noise and movement distractions during the training session. Try to be alone with the dog as far from other voices as possible.

Encourage the behavior by taking a treat or favored toy and putting the dog in a ‘sit’, then move the treat or toy all the way to the ground just in front of the nose.

After several repetitions with the treat or toy, try just using a ‘waving down’ hand movement, palm toward the floor or ground. Never reward with praise or treat until the behavior is complete and correct, but also don’t become tense or angry after failure.

For the slow learner or assertive dog, it may be necessary to supplement training with a collar and leash. Use a short nylon or leather leash – two to four feet is best – and put the dog in a sit and kneel down facing him.

Make the hand gesture, issue the voice command and move a treat or toy from the dog’s chin to the ground while pulling gently on the leash. The goal is to encourage, not to punish.

In the really hard cases, kneel down and put the leash loop under one foot and slide it under the knee of the opposite leg, facing at a slight angle to the dog. Pull the leash loop with your foot, sliding it over your leg. Simultaneously, gently take both the dog’s forelegs and pull toward you, issuing the voice command.

When the dog is in position, praise lavishly even though you executed the movement not the dog. You want the dog to associate the position with good feelings – his and yours.

Patience and commitment to regular sessions is key to training any behavior.