Dog Training – How To Stop Chewing 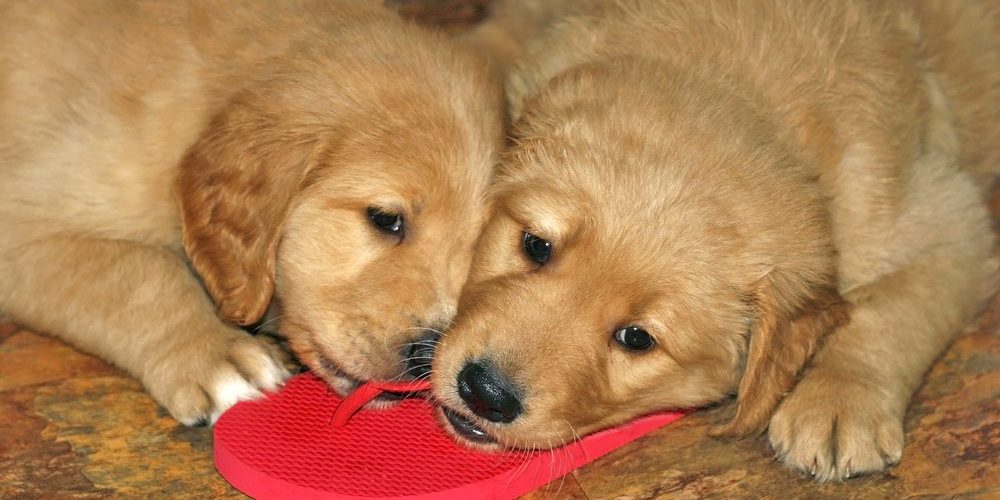 A dog’s jaw muscles are among his strongest. An average-sized Golden Retriever can untie the knot in a rawhide bone (or just chew it off) in minutes. If only they’d stick to those!

The tendency to chew will vary from one breed – and one individual – to another. But most dogs will chew on objects in and around the house. Keeping them focused on objects intended for them is a continuing challenge.

Younger dogs, puppies in particular, will usually have a greater tendency to chew and less discrimination about what they choose. But even young puppies can be discouraged from grabbing things the owner would prefer to keep whole.

First, as always, an ounce of prevention is worth a pound of cure. Keep shoes, laundry (socks, t-shirts, etc), where dogs can’t get them. Keep children’s toys separated from the dog’s. Which implies that the dog has some. So…

Keep plenty of attractive toys on hand, whether indoors or out, for Fido to chew on. Rawhide bones are attractive to some dogs, others prefer hard rubber or special plastic ‘dental’ bones. With some exceptions, real bones are usually not a good idea. Large beef bones are okay, but chicken and pork can easily splinter and lead to injury.

Fortunately, all kinds of special toys are available. Some even have hollow interiors suitable for holding treats. The dog usually has to struggle a bit to get at the treat in the center. That’s the whole idea. It keeps them occupied and gives them a good mental and physical workout striving to access the reward.

A sharp tone or a mild tap for grabbing an unsuitable object, such as a shoe or sock, is useful and appropriate. Yelling or harsh physical punishment is counter-productive. It’s better for both dog and ‘alpha’ (the leader of the pack – you) to vent that frustration elsewhere. Easier said than done the tenth time you’ve scolded the dog, but necessary for the mental well-being of both parties.

To practice developing specific habits, take some time (daily, if necessary and possible) to leash the dog and present an inappropriate object. If the dog moves toward it, jerk the leash sideways quickly and firmly and give a loud ‘No!’.

Be sure to jerk sideways, not back. A dog’s neck muscles are very strong, but throats can be too easily bruised. The movement is to inform, not to punish.

Outside, if the dog has a tendency to chew on plants, fences, etc, you can take advantage of some commercial mixtures or home recipes to discourage the behavior. A little cayenne pepper paste smeared on the leaves of ‘attractive’ plants can often eliminate chewing in one lesson. Some commercial preparations contain ‘bitter apple’, which discourages some dogs.

As with any dog training, patience, persistence and consistency are the keys to success. Suppressing chewing is often one of the more challenging since you’re training the dog to NOT do something, rather than to DO something.

Redirection to acceptable objects is your best bet, since you can’t eliminate the instinct. Stay alert and keep a cool head. Even when they’ve just chewed a hole in that new carpet. That’s expensive and annoying, but carpet can be replaced. Your relationship with your pet can’t.