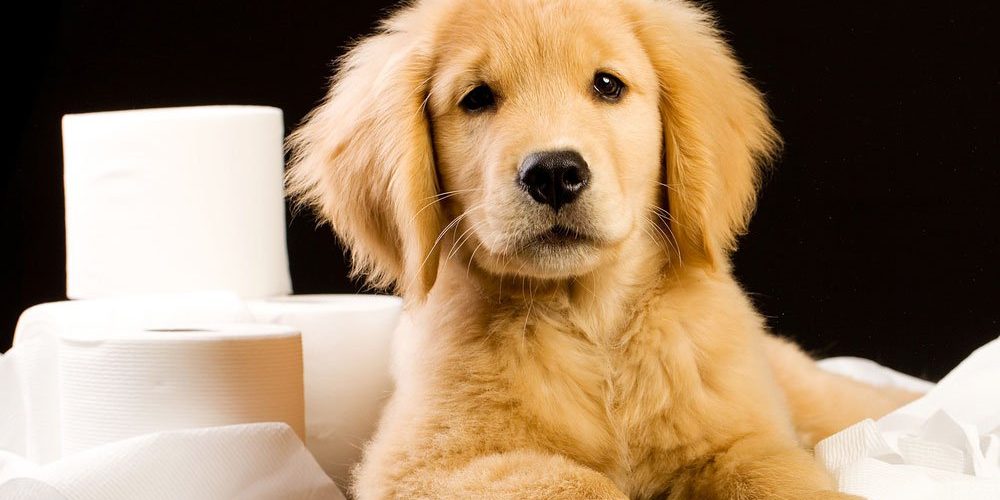 No training is more basic for pet owners than that first important lesson: Do it outside!

Teaching your pet to eliminate outside the home, not in it, usually starts between six and eight weeks of age. Dogs as young as four weeks have been started on the program, but at that age few have the muscular control to succeed.

Like any dog training regimen, trainer patience is as important as the dog’s temperament. ‘Sit’, ‘stay’ and other behaviors can often be learned in a few days. ‘Potty’ training typically takes weeks – sometimes as short as two, often a month or more.

As with other learned behaviors, it helps to watch for signs of the desired actions and enforce and direct them with a voice command followed by praise. In this case that technique works even more to the trainer’s advantage, since all dogs will naturally eliminate. The trick is to get them to do it when and where you want!

Watch for circling or squatting, then pick up the pup, say ‘outside’ and dash outside. The puppy may circle some more, but will often squat immediately. As it begins, say ‘Go potty’ (or some other unique phrase) in a clear, firm (but not angry) voice. Wait until it’s finished and praise lavishly.

You won’t always be able to catch the puppy about to begin, but don’t become angry or impatient when the dog eliminates indoors. It takes time for the dog to learn to tell you it’s time to ‘go outside’. It also takes time for the muscles needed to control bladder and bowels to develop.

Young dogs need to eliminate every 2-3 hours, on average. If you haven’t spotted pre-elimination behavior within that time, take the dog outside anyway. Issue the command ‘Go potty’ and wait. At first, usually, the dog will have no clue what you want.

Again, even when outside, it helps to wait and watch for the desired behavior then issue the command. That helps the dog associate the command with the behavior. If the dog hasn’t gone after a few minutes and a few ‘Go potty’ commands, take it back inside for an hour. Of course, if you spot the pre-elimination behavior in less time, go outside again immediately.

Dogs have a surprising ability to quickly learn what their ‘alpha’ (the leader of the pack) wants. This is almost always accomplished by associating a verbal command with behavior, followed by praise. Punishment is usually counter-productive, and nowhere more so than in waste elimination training. Never rub a dog’s nose in waste.

Paper and/or crate training is preferred by some. A pup can be trained to go on a newspaper, or on one of the chemically treated pads designed for the purpose. Some small breeds that live all day in the home may not need to go outside at all.

The technique has a couple of downsides however. Unlike cats, dogs will rarely go in a perfumed litter box. Newspapers (even with the top layer removed after the dog goes) will eventually create an unpleasant smell in the house.

Also, long before the odor becomes unattractive to humans, dogs can smell their own distinctive aroma. They don’t find it unattractive – quite the opposite. And that’s the problem.

Dogs that are paper trained will often prefer to eliminate indoors. Sometimes they’ll miss the paper by only an inch, creating a mess to clean up.

Once the odor is in the carpet, the dog will often seek that spot out as its proper ‘place to go’. This makes training the dog to eliminate outside even more difficult. Best to suffer a few accidents than to create a hard-to-overcome habit.

Patience, praise and consistency are the keys to any dog training. Elimination training is the first test for you and your dog.