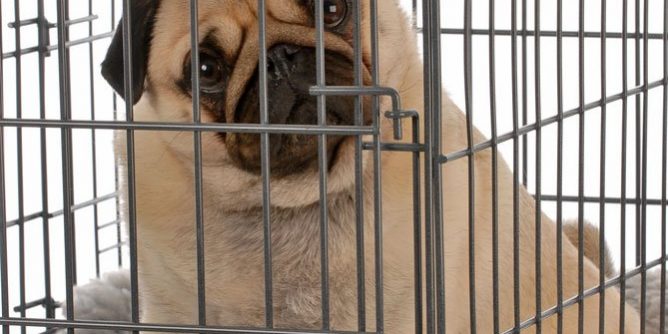 Debate continues unabated about whether or not crate training dogs is healthy or harmful.

‘Crating’ involves placing a pet in a cage, usually plastic or metal of roughly the size of the dog, for a period of time during the day or night.

Proponents argue that crating gives the dog a sense of ‘property’, a place it can call its own. In this little home within the home, the dog feels safe surrounded by familiar smells and objects. Here, the dog can retreat from fearful noises or boisterous children.

Those who favor crate training assert that potty training is much easier when combined with use of a crate. Dogs, they say, will naturally avoid soiling their ‘den’ and ‘hold it’ until they’re released to go outside.

Opponents counter that locking the dog into a cage barely large enough to turn around in suppresses its natural desire to roam. It removes the dog’s ability to explore its environment at will and to soak up stimulating sights and smells.

Those against the use of crates point to the frequent instances when puppies will play in their own waste and simply soil themselves worse. Locking the dog away, they say, is more for the convenience of the owner than the well-being of the dog.

As with any debate of this kind, there are no doubt good and bad points on both sides. Objective studies on the issue are sparse and equally divided. Provided certain ‘rules’ are observed, there’s probably no harm, and possibly some good, to be had from crate training.

Even proponents recognize that excessive lengths of forced crate time is bad for the dog. Any dog locked up in a small space is not getting needed exercise and may be restrained from eliminating for longer than is healthy. So, keep the crate time to no more than two hours maximum.

Opponents worry that crated dogs can injure themselves through a natural desire to escape or rowdiness inside the cage. Make sure that the collar won’t snag. Check to ensure there are no sharp edges on the crate, and that construction is strong enough to withstand the dog’s normal jostling and pushing on the walls. Above all, make sure it can’t tip over.

Advocates assert that crate trained animals will do better on car, train or plane trips. They’re used to the confinement and they have a familiar-smelling environment with them during a time of stress. For owners who have to take their pets on long trips, there may be some value in this view.

Critics suggest that (except in cases of permanent re-location) it’s best to leave pets at home. Apart from short trips to the grocery store or vet or to a neighbor’s house, animals fare better in familiar territory. But, if you must take them, be especially careful to do so in a well-constructed crate. Make sure no objects can fall into, not just out of, the cage.

Though the debate isn’t likely to be settled anytime soon, exercising common sense is the best way to judge the actual net effect – good or bad – on your particular pet. Try leaving the door open after a few weeks of training and see whether they seek or avoid the crate. Let the dog weigh in on the question.