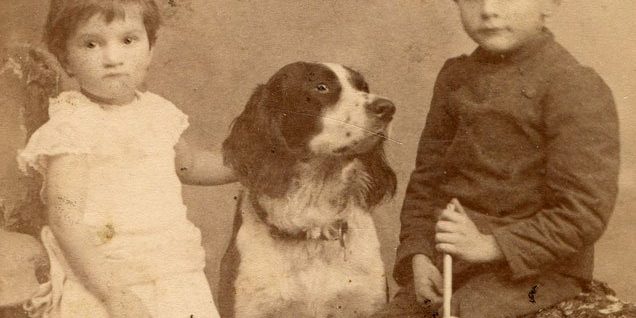 Ask any dog fancier to show you a snapshot of his lovable animal and he’s bound to regale you with an album-full of dog pictures!

Dogs and cameras seem to have been made for each other. But modern photographers count their blessings – it wasn’t always as easy as today’s ‘point and shoot’ technique which can stop a dog in mid jump catching a Frisbee, and come out looking perfect!

Dog Pictures From The Past

When the first photograph was taken in 1839, the photographer, Louis Daguerre, had to leave the shutter open for twenty minutes just to get enough light on the film (Quite an improvement over the eight hour exposure time earlier experimenters used.)

In just a few years, the art of photography spread like wildfire throughout the country and new developments made shorter exposure times possible – although exposure was still measured in minutes rather than the fraction of a second it now takes.

Photographing people was difficult enough. To keep them motionless during exposure they were often held rigidly in place by braces and vise-like head grips. Children were even worse – the slightest squirm blurred the photo. With daddy standing sternly nearby ready to scold the small poser if he scratched his nose, the photographer was nevertheless able to produce fairly good quality photos.

Dog Pictures Were Just As Popular

But just as with today’s dog owners, everyone with a pet pup wanted to get him into the act, too. However, even the best-trained pooch couldn’t be expected to freeze for five minutes while the photographer exposed his film.

The twitch of a friendly tail ruined many dog pictures in those early days – but nothing could put a damper on the dog owner’s enthusiasm. He wanted a shot of his dog – whether it was a daguerreotype, ambrotype, carte de visite, tintype, cabinet photo or snapshot.

Photographers kept trying, and out of the mass of blurs and blotches emerged a number of dog pictures immortalizing man’s best friend – and the photographer’s worst model!

Recently, a phenomenal growth of interest in early photography has sent a small army of collectors scouring the country for the daguerreotype and its successors. Some collect only outdoor scenes, others specialize in civil war soldiers – but it’s the valiant few who search for dog pictures that have the most difficult task of all.

The blurred images were of course discarded long ago, and good quality dog photos were uncommon even during the 19th century. Today they can be ranked in the “rare” class and have been sold for as much as $500 or more.

5 Situations When You Encourage Your Dog to Behave Badly
September 7, 2013

How To Determine If You’re a Suitable Dog Owner
September 7, 2013

Why Is It Important To Train Your Dog?
September 7, 2013
Search
Recent Posts
CONTACT MARYLANDPET.COM
Go to Top
Go to mobile version