You are here:
Dog CareDogsGrooming 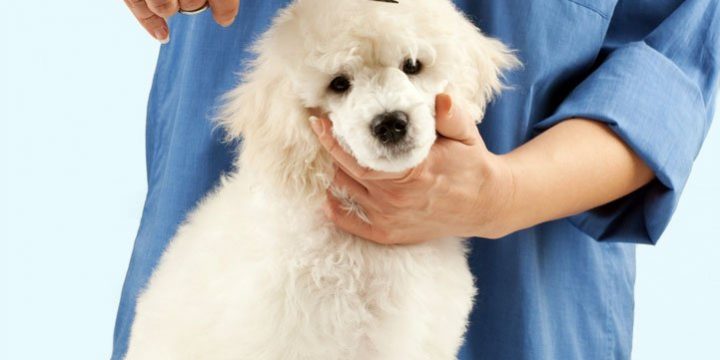 I groom my own Poodle. His front legs are very bowed. Is there any way to disguise this?

What can I do to keep my Poodle’s ears clean between grooming sessions?

Sometimes the hair in a Poodle’s ears clings so lightly it can be pulled out with the fingers. Other times, however, it is rooted as tightly as his body hair. In this case, you can use a pair of tweezers, preferably the type that works like scissors.

Remove a few hairs at a time, reaching only as deeply into the ear as you can see. The ear is extremely tender, so be careful not to poke or pinch it. Finish by cleaning the ear thoroughly with cotton and an ear lotion from the pet shop. Many Poodle owners prefer a non-oily lotion, but any of them will work well.

Every summer, my Cocker Spaniel gets foxtails in his ears and it costs me a fortune to have them removed. Is there any way to clip him so he won’t pick them up?

Clip the hair very short all around the ear opening and off the inside of the ear leather. Another effective method is to shave the entire ear, both inside and out. Keep the hair pulled out of the ear itself.

How do I properly shape my Poodle’s tail?

Most home groomers start by shaving too much of the tail and leaving a long, limp flap hanging off the end. Shave only about half of the tail, leaving the end half to be the core that supports the pompon.

After bathing and fluffing, comb the hair straight out past the end of the tail. Clamp two fingers of your left hand over the hair just at the tip of the tail (to protect it from the scissors), and then cut straight across with the scissors. Next, hold the tip and fluff the hair out. You will be able to see the sharp edges that need to be scissored off. Round and fluff, round and fluff, until the shape is right.

I am planning to breed my female Poodle and male Dachshund next time she comes into season. Will the puppies have to be clipped?

It’s possible. You never know what will happen in a mixed breeding until it’s too late. The resulting puppies could not possibly live up to their elegant Poodle mother or handsome Dachshund father. Why take a chance on producing a litter to swell the ranks of unwanted dogs in the country today?

Why is my Poodle so fluffy when she’s groomed at a shop and but becomes so krinkly when I bathe her at home?

If a Poodle is just towel dried and allowed to dry naturally, with or without a hair dryer, the hair will set wavy or curly. Your groomer apparently fluff dries. This involves flipping the hair with a brush while a dryer blows on it. Each small spot must be thoroughly dry before the adjoining spot is started. It is a time consuming process, but well worth the effort.