Dog Food & Supplements: An In Depth Look At Nutrition For Your Pet – Part 7

You are here:
Dog HealthDog NutritionDogs 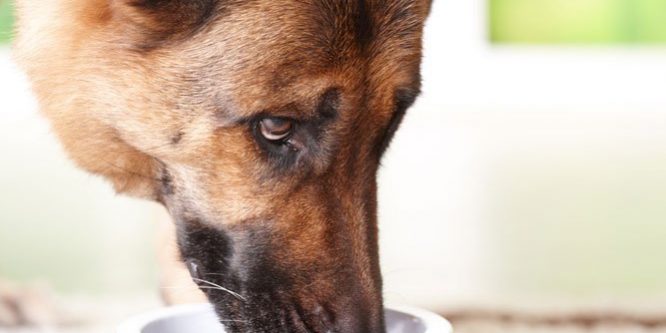 According to the canine nutritional experts, a ninety pound adult German Shepherd can require up to seven cans of dog food per day. A sixty pound Collie can require five cans per day. For the average household, this can become an expensive choice.

Dry dog foods, on the other hand, contain only about ten percent moisture – the other sixty five percent having been removed intentionally during the dehydration process. The dog owner is expected to replace the moisture either by providing the dog with ample amounts of water alongside the feeding dish, or by adding it directly to the dry food. Feeding directions on labels of dry dog food are very explicit about this.

The drawback in feeding dry dog food usually has been caused by the dog owner having allowed the family pooch to enjoy table scraps. Eating people-food accomplishes absolutely nothing for Sparky’s nutritional needs, and simply creates the problem of the finicky eater.

Under the mistaken belief that he’s doing the dog a favor, the dog owner is really robbing the animal of nutrients that are rightfully his – taking food right out of his mouth, so to speak.

In the middle of the scale are the “soft-moist” products which contain more moisture content than dry foods, but considerably less than the canned foods. They are the easiest of all three types to prepare, but are far and away the most expensive. Probably, they are economically most suitable for the small dog.

A compromise solution for the family with the finicky eater as well as the family with a limited dog food budget might be a combination of both canned and dry. Mixing two types – each balanced nutritionally – does nothing to upset the interrelationships of the nutrients.

It’s much easier to control the weight of the family dog when this combination is used. Rather than cut down on the volume intake of the obese dog, a decrease in the amount of dry food, with corresponding increase in canned food will accomplish this without having a constantly hungry dog begging for handouts.

On the other hand, increasing the amount of dry food, with a corresponding decrease in canned, may help to bring the weight up on the dog that has a tendency to be skinny.

The diet of today’s pet dog has come quite a long way from the old days of being fed whale blubber, potatoes and cornbread. Now if manufacturers would take just as much interest in human foods… but for now, if your dog’s choice between caviar or a commercially prepared, balanced dog food, he’d be wise to select the dog food. Pound for pound – and dollar for dollar – the dog and his owner would be way ahead.