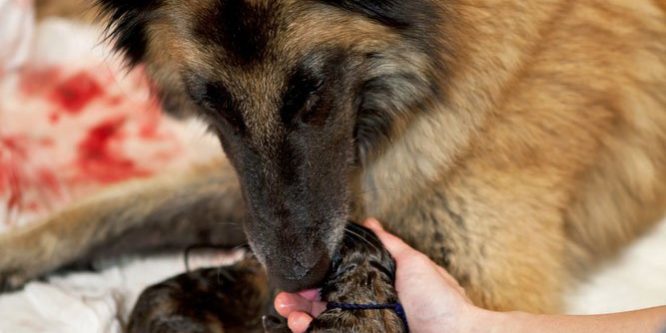 Building a whelping box helps you prepare for dog birth. At least 4′ wide by 6′ long by 1′ high, will give the dam a place to feel comfortable and enclosed and keep newborn pups from wandering the first two weeks. Lining the bottom with newspapers over plastic will make for easy cleanup.

About 12-24 hours prior to birth, the female will become restless and frequently trot around, licking her vulva and looking to you for guidance. Be prepared to give some by memorizing the following helpful hints.

When a pup arrives it will be covered by a birth sac and attached by an umbilical cord. Just as with humans, the cord provided nutrients and oxygen to the pup during gestation. After birth, oxygen is taken in by breathing. In order to breath the sac has to be broken and the lungs cleared of fluid.

Oftentimes, the sac will rupture normally, or with a little help from mom. If that doesn’t happen within a minute after the pup emerges, take action. Break the sac by CAREFULLY puncturing and tearing with a clean fingernail or by rubbing the pup’s back GENTLY with a towel.

The cord is still attached at this point. Don’t try to tug it loose or cut it yet. Force on the cord can cause a hernia and tearing it loose can lead to bleeding and can easily lead to death.

Hold the pup gently with its rear up and mouth down. Look for breathing. If you hear coughing and choking, swing slowly in a very shallow, slow arc to expel fluid from the lungs. Take care not to pull the cord. If you don’t observe breathing within a few seconds, take a bulb syringe and clear fluid gently from the throat.

Squeeze the syringe before inserting into the mouth, place it only a short distance in, then release. You should have picked up some fluid if there’s any there.

One way to expel fluid is to put a towel over your lap and place the puppy between your thighs on the towel, then use the syringe. Repeat to clear both nostrils. This technique will work fine, but it doesn’t take advantage of gravity to help clear the fluid. Holding the pup sideways or upside down is trickier, but can give you that advantage.

Once the pup is breathing, tie the umbilical cord (starting about a half inch from the belly) with unwaxed dental floss in two places an inch apart. Cut the cord a quarter inch from the tie closer to the stomach. The cord from mom’s side doesn’t need to be cut or pulled out. It should slough off naturally.

An alternative method uses hemostats to tie off the cord in two places. This works well for those who know how to use them. You need to ensure that the clamps don’t twist the cord, and that they are completely sterile after EACH use. Infection is one of the leading causes of puppy death.

On the upside, it’s much easier for one person to clamp with a hemostat, clamp again, then cut the cord all with one hand. Tying dental floss, for most of us, requires two hands or an assistant. Use whichever technique works best in your circumstances. But for the hemostat technique, be sure to keep several stable containers of alcohol nearby to put the hemostats in between pups.

In either case, daub the end with iodine or a commerical disinfectant.

Allow the dam to eat the bloody afterbirth. It doesn’t look appetizing to humans, but it contains vital nutrients that will help her feed the pups properly. Some vets disagree, contending it provides no nutrition and can cause diarrhea; the point is controversial.

Be prepared to keep this up for several hours after a sleepless night. Pups can number up to eight or ten and sometimes have died before birth. They can arrive anywhere from 10 minutes to an hour apart, though every 15-30 minutes is normal. Longer than an hour with no pup indicates a problem unless all have been expelled.

After an hour and no pup, look for continued contractions and arching of the back with no pup as a sign of trouble. When she’s done she’ll often want to leave the whelping bed and eliminate and run around outside. That’s fine. Congratulations to both mom and helpers.

Have your vet’s number handy for any problems that arise.