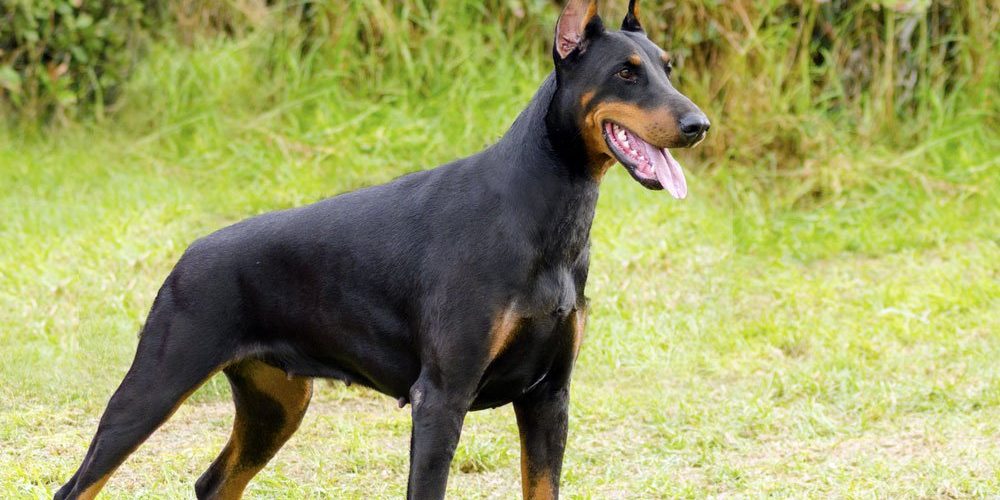 It never ceases to amaze me just how interesting the history of many dog breeds are. This is especially true of the Doberman Pinscher. Many years ago, during the 1800s, a man named Louis Doberman from Thuringen in Germany had a career of collecting taxes.  Every day he would set out on foot and literally walk door-to-door asking people to pay their overdue taxes.

Needless to say, this job was obviously quite rough and Mr. Doberman  needed an excellent guard dog to accompany him on his rounds. He then set out with the goal of creating such a breed. The most likely mix came from the old German Shepherd and the German Pinscher, with later crosses using the Greyhound, Weimaraner, and the Black & Tan Manchester Terrier.

Soon enough Mr. Doberman gathered the perfect prototype of the breed which today bears his own name. The original Doberman dogs looked a little different than today’s Doberman Pinschers, with rounder heads and a thicker bone structure, which in time was bred to have a more narrow race-like look. By the year 1900, the Doberman Pinscher became so popular that it had its own breed club.

The first Doberman Pinscher found its way to the United States in the early 1900s. Both the US and European nation took to this breed has a perfect police dog and guard dog. In time, it was also used as a war dog. In time, these valuable functions became the desire of many household families, in addition to the sleek, defined appearance of the animal. By the year 1977, the Doberman Pinscher was the second most popular dog breed in the United States.

The Doberman Pinscher is a highly intelligent animal that is one of the most capable guard dogs and watchdogs a family could own. Not only is it a highly dependable family protector, Doberman Pinscher dogs are also one of the most easiest breeds to train. They are alert and always ready to serve. These dogs are quite sensitive, obedient, reserved with strangers, and are committed to loyalty.

Taking Care Of  Your Doberman Pinscher

Upkeep of the Doberman Pinscher takes more than average daily exercise.  Bundled with enormous pockets of energy, this dog can become very frustrated and even destructive when kept indoors too long without physical and mental stimulation. Families considering owning a Doberman Pinscher should be prepared for a lifelong commitment of daily brisk walks and plenty of vigorous dog games to play outside. Dobermans Can live outside in both hot and cold temperatures, but is more comfortable when inside with its family.

The Doberman Pinscher has a lifespan of up to 12 years, with 11 being the average.  Veterinarians suggest that these dogs get specifically tested for hip dysplasia, eye problems, cardiac issues, and DNA for vWD. Major health concerns that may arise are gastric torsion, demodicosis, vWD, and osteosarcoma. Occasionally, minor health problems sometimes include PRA, albinism, narcolepsy, and hypothyroidism.