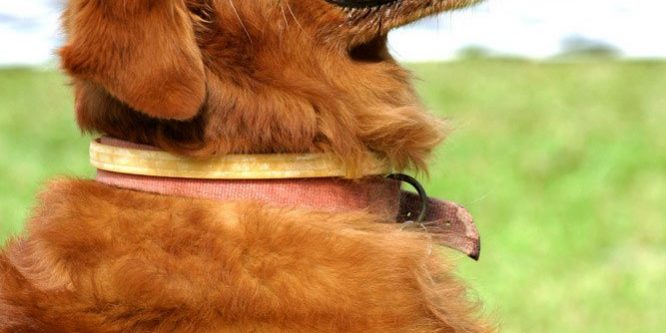 Most packages containing flea collars or other similar-type pest-fighting devices usually carry a printed caution on the front: “Do not allow children to play with this collar”.

The purchaser is then invited to read the additional precautions printed on the reverse side of the package.  Over 50% of the dog owners polled about their knowledge of flea collars admitted that they either did not read the directions, or if they did, simply did not pay much attention to them.

Flea collars should be buckled securely, but not tightly, around the dog’s neck.  A collar buckled too tightly will cause greater levels of the active ingredient to be absorbed into the bloodstream of the animal. This condition usually manifests itself by neck irritation, followed by a loss of hair under the collar.

When first placing a flea collar on a dog, the owner should observe the neck area for the first few days and be alert for signs of irritation.  If irritation occurs, the collar should be removed immediately.

Additional precautions on most packages point out that each collar is intended as an insecticide generator and is not to be taken internally by man or animals. One might ask who in his right mind would want to eat a flea collar for breakfast. No “man” in his right mind would, but a dog (especially puppies) might consider such a collar an intriguing chew toy!

Playful puppies enjoy chewing and gnawing on anything, including each other! It is for this reason that manufacturers include the following precaution on each package containing a flea killing device: “Animals should not be allowed to chew on this collar”

Because the active ingredient used in flea collars is absorbed into the animals’ bloodstream, some animals may show allergic symptoms. Some dogs, like humans, are allergic to certain medications, while others can accept the medications with relative impunity.  It is for this reason that each animal wearing such a flea device for the first time be observed closely for any signs of adverse reaction.

If an animal appears lethargic or refuses to eat, you should remove the collar at once.  Dogs who have an allergy to these pesticides have been known to die. Such deaths need not occur if the owner takes a few moments to read the directions and properly observe his pet, should any side effects develop.

A dog wearing a flea collar will be more reactive to anesthetics, and a number of anesthetic deaths have been attributed to the use of these devices. The finger of guilt must ultimately be pointed at the dog owner for his failure to observe the precautions as set forth by the manufacturer.