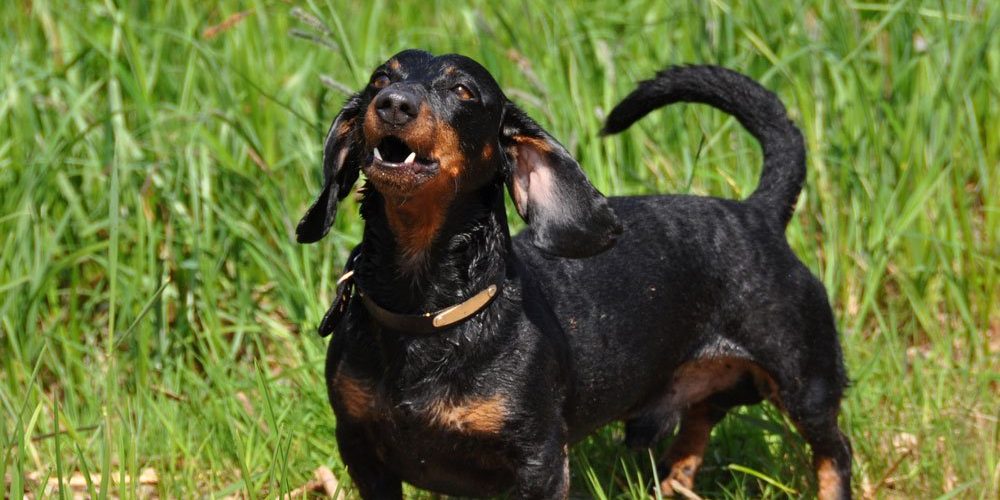 Dachshunds are a naturally feisty breed. Bred to hunt badgers, they had to be tough and resourceful. But that assertive nature should not be allowed to turn against you. You need to be the alpha dog.

Individual dogs will vary in degree, of course. There are submissive Doxies though fewer than other breeds, on average. Some will try to insist on having their own way at all times, much like most terriers. But training can modify their behavior, especially if you start when they are young and stay consistent.

Zero tolerance should be the rule for all aggressive behavior, whether toward you, a family member, or strange people and animals. Biting the leash during training is one mild manifestation.

Discourage it by stepping on the leash close to the dog’s head. Then with the other foot, slowly pull the leash down to the ground closer and closer to the collar. Take care not to stress their neck, as Dachshunds are prone to spinal problems. When they have released the leash, praise them lavishly.

To discourage snapping or biting or excess barking a squirt bottle comes in handy. When your dog shows this behavior, give him a little squirt against the muzzle. Avoid the eyes. That startles your dog and it is unpleasant besides. Repeat, if necessary, but avoid making it a contest of wills. That only tends to make it appear to the dog that you are a competitor. Firm consistency is preferred to counter-aggression.

If your Dachshund persists, isolate your dog and be prepared for some barking. Like spoiled young children, a dog will sometimes try to whine or shout its way out of punishment. Give your dog sturdy chew toys and allow him to work out the aggression on those while he’s in the ‘time out’ box.

Follow this negative reinforcement with some positive reinforcement. Look for instances of good behavior and praise it lavishly. Use a moderate amount of treats if necessary. The point is to help the dog see for itself the different consequences of its own behavior in terms of your response. Doxies are smart. With persistence, they will catch on.

For example, one may become assertive during fetch, refusing to give up the ball. Try to distinguish between genuine willfulness and a simple desire to play a different game, tug. Make the difference clear by using a rope for tug, which they love.

It’s necessary to tread a fine line, though, since tug can lead to encouraging aggression. Exercising them a little harder than you would a more playful or placid dog will help. Aggression is partly caused by the frustration of pent-up energy with no positive outlet.

An assistant can be a big help here. Toss the ball to a partner several feet away, along the ground. When the Dachshund gives chase, make sure the partner gets the ball first. Repeat the exercise a few times, then let the dog win.

With patience and a little creativity, you can channel your Dachshund’s aggression into more positive directions.