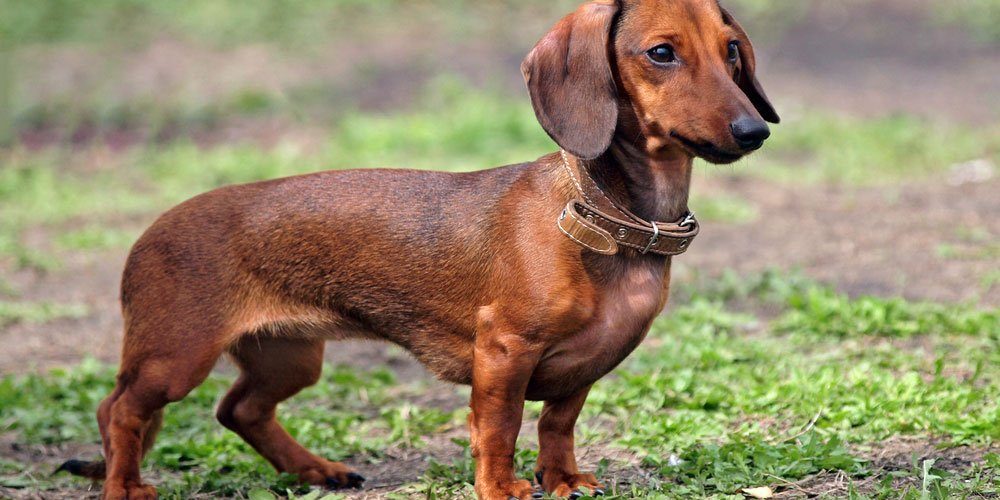 The Dachshund was officially recognized by the AKC in the early 1900s, and according the the current AKC registration list, this dog has become one of the top five registered breeds of today. This small sized member of the hound group has an unforgettable appearance, with a short, long body, small legs, and a handsome pointed face.

The origin of the Dachshund goes back to the 1500′s in which their main function was to flush out badgers.  Today, however, the Dachshund has become an everyday family house pet as well as retained the sharp edge to compete in Earthdog trials and Dachshund field trials.

If you enjoy smaller sized dogs who show off a bold and adventurous attitude, then the Dachshund is the right one for you.  It loves to hunt, and dig.  If you are fortunate enough to live near a wooded area with trails, you’ll enjoy watching your Dachshund catch a scent and go out hunting for game. He is independent but always appreciates the love and attention of his family.

The Dachshund is known to be a wonderful house pet and great around children, but can also get a bit snappy if introduced to small kids he does not know. Some of them are more prone to barking than others, but all Dachshunds are considered to be excellent watchdogs with high energy levels.

Even though these dogs are extremely active and need to expend energy on a daily basis, they are small enough to get plenty of exercise indoors by running around.  However, nothing replaces a nice long walk on a leash through the great outdoors. The Dachshund also enjoys playing games and mental training challenges.  Training this dog breed may be a little tough at times, as he is known to be stubborn, but with patience and time, a Dachshund can become excellent at obedience commands.

The smooth coat of the Dachshund does not require much grooming.  If you own a long-haired Dachshund than a thorough brushing once or twice per week is all that is needed. The short-haired version may only need a quick brushing once weekly in order to remove stray hairs.

The Dachshund dog breed is known to have a lifespan of between 12 and 14 years.  The only major health concern that is typical of this dog is intervertebral disk disease. Minor concerns are KCS with the occasional health problems springing up of diabetes, gastric torsion, Cushing’s disease, deafness, patellar luxation, and seizures. It is suggested that the only specific health test that should be requested is for eye problems.  Obesity can also become a problem with the Dachshund dog when overfed.