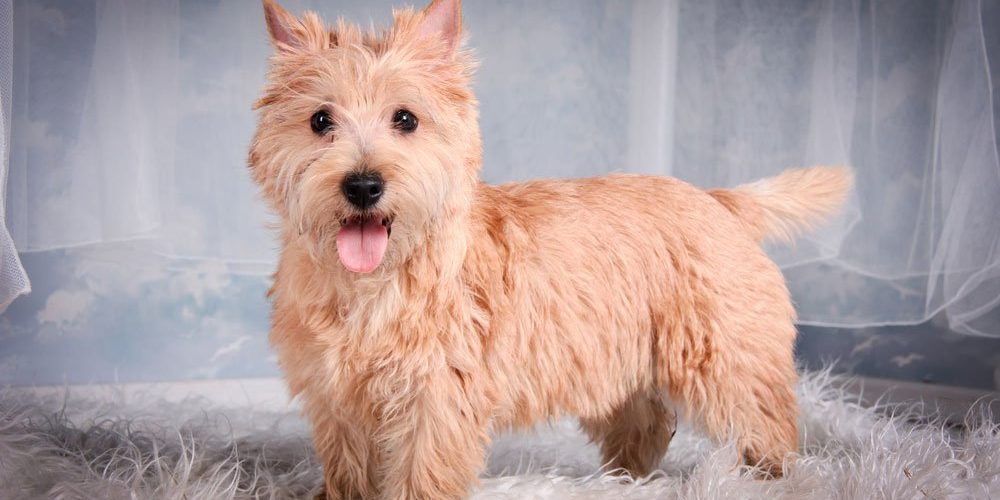 The Cairn Terrier and the West Highland Terrier or Westies are close cousins, and related also to their Highland neighbor: the Scottie.

The Cairn is closest to the original breed developed in the Highlands of Scotland over 200 years ago. These intrepid small dogs would chase small game from cairns (rock piles) and generally help in the hunt. Today, that behavior has changed to take on new challenges, but the instinct remains.

They retain the large feet and teeth of their ancestors, but the latter are rarely used to harm these days. They’re feisty but among the friendlier terriers to strangers and other small animals. They may chase a cat, but rarely try to harm one.

They strongly resemble their Scottie cousins, but tend to be a little taller, reaching 12-14 inches (31.5 cm) on average and weighing up to 18 lbs (8 kg). The ears are pointy and erect, always alert to their surroundings. The eyes reflect that same attention to the environment.

They make perfect traveling pets, but long car trips should be punctuated with occasional walks to let them work off some of their perpetual energy. Fortunately, they’re easily trained and respond quickly to requests without the excessive willfulness common to some terrier breeds.

Westies are a close relative, but their coat is typically all white, as distinguished from the black or brown of their cousins. The topcoat is straight over a dense undercoat so they will shed somewhat and regular grooming is important to keep them in optimal health.

During the 18th and 19th centuries when the breed was being developed, their white coat was selected for since it helped distinguish them clearly from game during a hunt. A brown terrier in flight can resemble a fleeing fox from a distance.

Despite their natural high energy, Westies (like virtually all dogs) sleep a lot more than people, anywhere from 13-15 hours out of 24, though longer is not abnormal. They’ll sleep through the night usually, taking dog naps throughout the daytime.

But when they’re up, they’re up. They love a good walk and play comes as naturally to them as to children. Lack of exercise can lead to behavior problems, so though they live well indoors make sure they get plenty.

They love companionship but can tolerate stretches of time alone, since they tend to be a little on the independent side. Given the proper environment – the right toys and a safe area – they can amuse themselves for long intervals. Like all terriers, though, they were bred to hunt and digging will occur with unsupervised dogs. Take care that your garden isn’t accessible.