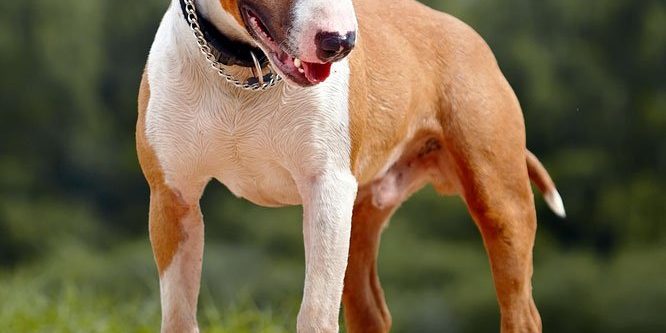 Dog fighting and bull baiting were considered to be a leading form of entertainment throughout Europe in the past. Owners of these warrior dogs were in a constant state of breeding different strains in order to produce increasingly better and stronger fighting dogs.

Sometime during the early 1800s, there was a cross between the old English Terrier and the Bulldog. The result was a dog which was known as the “Bull and Terrier”. Soon enough, the Spanish Pointer was added to the mix in order to give more size to the animal.

The final result was a strong, agile, and tenacious dog that fought its way through the pits with total domination. These Bull and Terrier dogs became increasingly popular at fighting exhibitions but were never adored like other breeds because of their association with “lower society”.

Eventually, all dogfighting was abolished and enthusiasts of the Bull and Terrier started to compete them with other dogs for show and appearance. Sometime during the decade of the 1860s, a man named James Hinks crossed the Bull and Terrier with Dalmations. This created a strain of all white dogs which became known as the Bull Terrier.

This strain of all white Bull Terriers had much success in the ring and quickly attracted the attention of more and more people. They eventually somewhat of a fashionable canine companion for men who wanted to have a masculine, rugged, and good-looking dog by their side.

Through additional breeding, the Bull Terrier’s distinctive head shape started to emerge. Sometime during the early 1900s, the all white strain had other colors incorporated into it by being crossed with Staffordshire Bull Terriers. At first this practice was rejected by most Bull Terrier fans but finally gained its own status as its distinctive breed by the AKC in 1936.

Three words can easily sum up the personality and temperament of the Bull Terrier: assertive, comical, and exuberant. These dogs have extremely high energy levels and are considered to be a bit on the mischievous side, like that of a cat.

A bit stubborn, the Bull Terrier sometimes prefers to see things his own way which can lead to problems with training. However, with enough time and the right attitude, these dogs can be trained to be excellent watched dogs with the fighting ability to protect its family should a physical confrontation be warranted. But never forget, regardless of its tough-guy image, Bull Terriers are sweet natured and devoted to its family.

Taking Care Of Your Bull Terrier

Bull Terrier dogs must be entertained in order for them to remain happy. Physical and mental stimulation is required every day through vigorous walks on the leash and fun games to play. This dog has moderate tolerance to cold and heat which makes it suitable for staying outdoors during the daytime hours, but should be kept inside at night with the family. Grooming is minimal due to its short coat. A weekly brushing to remove dead hair is all that is needed.

The average lifespan of a healthy Bull Terrier is between 12 and 15 years. There are a few major health concerns that need to be looked after, including kidney problems and deafness.  Minor health issues include allergies, compulsive behavior, and heart problems. Occasionally seen is patellar luxation, but this is extremely rare with the Bull Terrier.