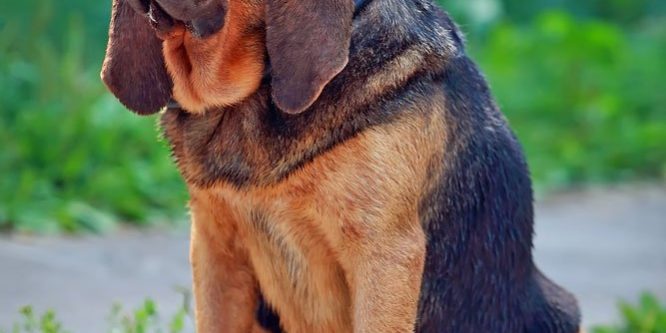 Although the bloodhound is one of those dogs that has a lazy facial expression and is often found lying around the house, do not let these characteristics fool you. This dog can be an extremely focused and energetic tracker once he catches a trail scent. And the bloodhound is known to be very independent, tough, and often times a bit stubborn.  However, he is also one of the most gentle dog breeds a family can have under their roof.

Bloodhounds are not considered to be the most easiest of training dogs, however, if you want to teach your dog about trailing tasks, the bloodhound is the number one choice.  When it comes to being a family pet, this dog can be a friendly companion to have around the house whom fair well with children.

Due to its programed genetics for hunting, the bloodhound does need an average amount of daily exercise.  And although it spends most of its time being lazy and sleeping in the yard, its energy reserves can get put in full motion when on the trail. And be sure that when you are training the bloodhound he is in a safe area and cannot wander off as they some times do when their attention is focused on something.

Because of its large facial features and heavy wrinkles, the bloodhound needs to be groomed on daily basis.  You must give extra cleaning care to the ears and the flaps around the eyes and gums.  When it comes to its short-haired coat, upkeep is typically minimal, with just the occasional brushing now and again.

The bloodhound can be the ideal indoor or outdoor pet. And although it prefers mild temperatures, it can withstand hotter climates so long as there is plenty of shade and soft bedding to rest in. For those of you who are obsessed with a clean house, make note that the bloodhound can be a bit on the messy side.

Since the bloodhound is a larger breed than most other dogs, its lifespan only lasts between seven and ten years. The major health concerns that are typical in this breed are CHD, gastric torsion, ectropion, otitis externa, elbow dysplasia, and skin-fold dermatitis. Minor issues in which you should ask your veterinarian to look out for is hypothyroidism.