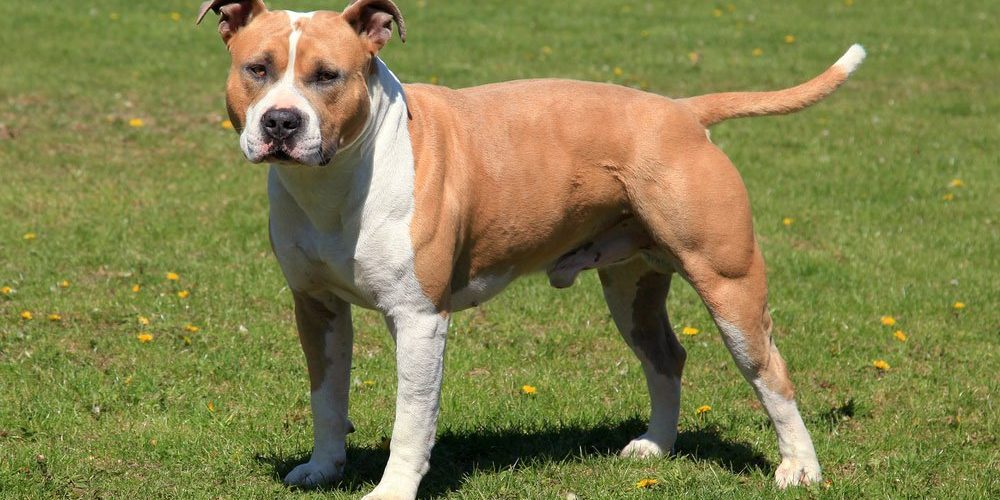 Since the American Staffordshire Terrier is famous for its fighting ability, it is no wonder that this powerful breed has a muscular build. However, there is much more to this breed than its unfortunate heritage as an aggressive fighter. Many Staffordshire Terrier lovers praise this breed’s affectionate and loyal family nature.

It was not until 1870 that these dogs were brought to America. American Breeders preferred this strong, agile breed as a fighting dog and worked to increase the weight of the dog. They also concentrated on enlarging the breed’s head size. When dog fighting became illegal in the USA, American breeders developed two strains of the Staffordshire Terrier.

The American Staffordshire Terrier is a very muscular and powerful dog with a large bone structure. This solidly built breed weighs between 57-67 pounds. While this breed may have the look and build of a fighter, it is actually very loving and protective of its family.

American Staffordshire Terriers are not ideal apartment dogs, but they will survive in this situation if the owner of this active breed has the energy and stamina to keep up with the dog. These dogs are very active, so will need to take frequent long walks.

A home with a securely fenced yard is a better fit for the breed. However, the Staffordshire Terrier is sensitive to cold and does need to have a warm environment, so during winter months you should be prepared to bring your dog indoors after it burns off some energy with a romp in the yard.

The American Staffordshire Terrier is a gentle happy, outgoing dog. This breed plays well with children and relates well to adults. However, you should never leave young children or other pets in an unsupervised situation with any big, strong dog.

These dogs make excellent guard dogs, since they are territorial and very protective. The breed’s original fighting qualities are still evident toward enemies and intruders to the owner’s property. These dogs should be socialized so they accept guests and other animals. Early training, while your dog is still a puppy and you are stronger, is a must. This dog lives to please its owner, but may be hard to housebreak.

The American Staffordshire breed is generally healthy. However, this breed should receive yearly health screenings to rule out some hereditary traits like cataracts and congenital heart disease. These dogs are also prone to hip dysplasia, so be sure to ask your breeder if the parents have been screened for this hereditary trait, as well.

The short coat of the American Staffordshire Terrier is easy to groom. Brushing your dog’s coat on a regular basis to remove loose hair should suffice, since the breed does not shed profusely. You should also brush its teeth once a day and clip its nails if they don’t wear down on their own.

The American Staffordshire Terrier is a protective and loving dog that will wholeheartedly protect its beloved family. These characteristics may just make this breed an excellent choice for you.