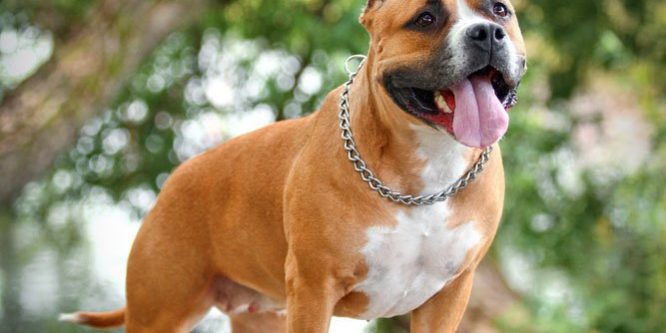 Dog enthusiasts consider the American Staffordshire Terrier, otherwise known as the Pit Bull, to have come from the exact same lines as the Staffordshire Terrier. The original crossing of breeds sprung from the mix of an older type of Bulldog with some other older types of Terrier. The result was a dog which is currently known as the Bull Terrier.

These dogs became popular for individuals who enjoyed the practice of dog fighting.  Dogfighting was an extremely popular sport despite the fact that it was declared illegal. The United States started to see many Staffordshire Terriers around the late 1800s when they were brought over for dogfighting entertainment. It was at this time that they became known as the American Bull Terrier.

Americans then wanted to create a larger, more aggressive version of this dog, so the mix of the English version and the American version were combined, creating a new breed of dog that was recognized by the AKC in 1936. The official breed name was American Staffordshire Terrier (Pit Bull).

The American Staffordshire Terrier has a very aggressive temperament when feeling defensive, especially in response to protecting its family. Needless to say, these pets make an excellent watchdog and will protect its owners and property at all costs.

Pit Bull dogs are generally very friendly towards strangers so long as the owners are present.  However, they can be a bit tenacious and stubborn when mixed with other dogs.

Taking Care Of Your Pit Bull

American Staffordshire Terrier dogs will need plenty of exercise on a daily basis.  Long walks and vigorous running games are perfect examples. Although this dog can live outdoors if necessary, it is much more comfortable when staying inside the house with its family. Taking care of the coat is fairly easy for upkeep; just a view quick strokes of the brush on a weekly basis is all that is necessary.

The American Staffordshire Terrier as an average lifespan of 12 to 14 years.  Major health concerns include CHD, PRA, and cerebellar ataxia. Minor issues are elbow dysplasia, hypothyroidism, and heart disease.

You might occasionally see allergies and cruciate ligament rupture. Veterinarians suggest that you have your American Staffordshire Terrier checked for hip and elbow problems, eye issues, thyroid, and cardiac.