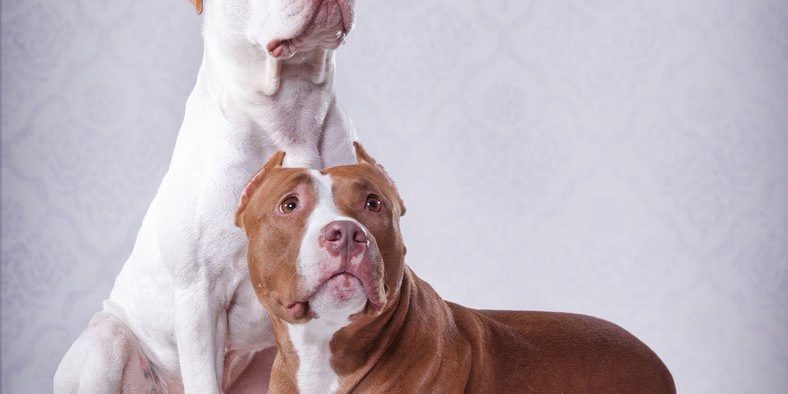 The American Pit Bull terrier is quite a bit different from his smaller relatives. The product of an historical cross between the Bulldog and Terrier carried out in the UK in the mid-1800s they are a bit of both. The combination, though, is a unique dog.

They typically weigh between 45-60 lbs (20-27 kg) and stand 20-24 inches (45-54cm) tall at the shoulder. The coat is usually short, dense, and beige or gray, though white is far from unknown. Their lifespan is about 10-12 years on average, given good care. They’re muscular and seek exercise to keep them not only fit but calm. The eyes are somewhat triangular.

These fighting dogs were bred for ferocity, strength and fearlessness – qualities highly valued in hunting and illegal sports, such as bull-baiting and dog fights. Because of their fierce reputation, not always justified, they’re illegal to sell or breed in the UK and Canada. Many areas of the U.S. and Australia allow ownership but place restrictions on use, such as requiring a muzzle when the dog is out in public.

But the breed is a mixture in ways other than its ancestry. Selective breeding practices aimed to eliminate aggressive behavior toward people, while retaining it toward other animals. Yet, as a watchdog, the opposite attitude is preferred. As a result, training an American Pit Bull Terrier requires care and consistency.

While their reputation as being dangerous to people is often overstated, attacking strangers is not unknown. In the case of this breed, the training regime plays a large role in outcome. That’s somewhat unlike many other terrier breeds where the training shapes behavior but the dog retains much of its instinctive behavior regardless.

Fortunately, like any dog, American Pit Bull Terriers can definitely be trained and trained well. They’re extremely athletic, intelligent and have tremendous endurance. They’re outstanding on the obstacle course and perform well as Border Patrol or Police dogs where they’re often used for drug or explosive sniffing duties.

Because of their strength and intelligence, they may also get ‘jobs’ providing services to the deaf, where they help keep their companion out of harm’s way. Today, their usual role is often much more mainstream. They are frequently used as watchdogs, a job they do extremely well.

While they can be aggressive, many owners know that their personal pet is loving, loyal and even friendly. American Pit Bull Terriers can enjoy play and will chase a ball or Frisbee until long after the human is worn out. This again is evidence of a flexible nature, highly influenced by training and early experiences in the dog’s life.