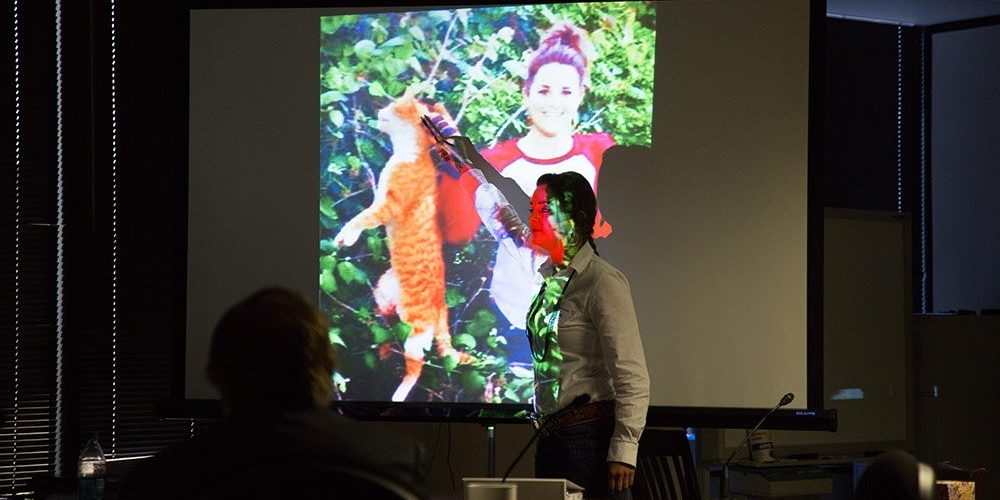 AUSTIN, Texas (April 27, 2016) — A state administrative court has concluded a two-day hearing on whether Kristin Lindsey will lose her Texas veterinary license after shooting an arrow through a cat’s head, posting a picture of it on Facebook and bragging about the killing. A ruling is expected later this year.

Misty Christo, an attorney with Alley Cat Allies, was in the hearing room in Austin for both days of testimony about Tiger, the cat that Lindsey killed. The Texas Board of Veterinary Medical Examiners argued that the cat who was killed was in fact Tiger, was owned, and was killed without his owners’ consent.

“It was shocking to hear testimony confirming that Tiger was still alive in the picture that Kristen Lindsey posted on Facebook,” Christo said. “The testimony demonstrated in terrible detail how much Tiger suffered from her cruelty.”

“And regardless of any questions about whether this cat was Tiger, it was completely unacceptable for a veterinarian to kill him this way. Kristen Lindsey betrayed the trust that we place in veterinarians to care for animals. The information from this hearing emphatically reaffirmed that her veterinary license should be revoked forever. She should never care for an animal again.”

Alley Cat Allies has posted more details about the testimony and pictures from the hearing here:https://www.alleycat.org/news-april2016-kristen-lindsey-hearing.

As the nation’s only national advocacy organization dedicated to the protection and humane treatment of cats, Alley Cat Allies has followed the case from the beginning, called for action against Lindsey and offered testimony in preliminary hearings.

Attorneys in the case have until June 10 to file closing briefs to the court. Reply briefs will then be due by July 1. Alley Cat Allies will continue to follow the case and share new developments and the ruling as they occur.