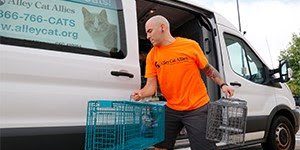 HOUSTON – Sept. 3, 2017 – Alley Cat Allies has deployed an expert, bilingual disaster response team and is sending additional resources to help Texas and Louisiana organizations rescue cats and other animals whose lives continue to be in peril because of Hurricane Harvey.

“Many people and animals have been displaced, shelters are overflowing and families were forced to make difficult decisions about what to do with their animals,” said Becky Robinson, president and founder of Alley Cat Allies. “There are many cats and other animals who haven’t eaten for days and may be lost from their homes. We are eager to help the courageous people who are finding and saving these animals.”

In many cases, community cats, sometimes called feral cats, were left on their own when their human caregivers evacuated as floodwaters rose. The Alley Cat Allies team will help shelters and caregivers throughout Texas and Louisiana to rebuild programs that were in place to help community cats, including Trap-Neuter-Return (TNR). They will also be forming a network of people to check on colonies, resume feeding them and place new cat houses and shelters as necessary.

The Alley Cat Allies disaster response team is starting its work in Spring, a Houston suburb, by assisting the Texas Litter Control (TLC) organization. TLC requested help as a member of the Alley Cat Allies Feral Friends Network. Alley Cat Allies has brought truckloads of traps, dens and cat carriers, which will all be in high demand. Additional supplies such as leashes, cat food, kitty litter, water, blankets and towels are also being delivered.

In Texas and Louisiana, Alley Cat Allies is offering emergency funds to overwhelmed shelters and organizations. In one such case, the Humane Society of Louisiana (HSLA) has used these funds for two disaster-ready transportation vehicles that are facilitating the rescue of hundreds of animals stranded by floodwaters. Jeff Dorson, executive director of HSLA, thanked Alley Cat Allies for helping in a second consecutive year, after the organization previously responded to extreme flooding in 2016.

“Once more, Alley Cat Allies has come to our aid in a time of need,” Dorson said. “This critical support is helping us to save cats and other animals who need our help. The generosity, partnership and good-will are helping us to get through some very challenging days as we try to do as much good as we can.”