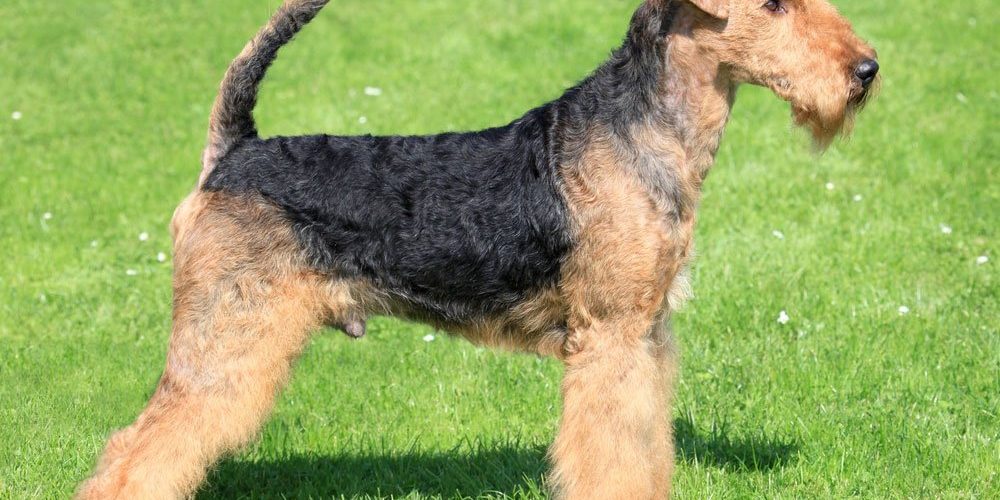 The Airedale Terrier is not called the “King of Terriers” for nothing. This dog is the tallest terrier from the entire breed family. One of its primary progenitors are the Black and Tan and the old English Terriers. They were medium-sized dogs whom highly admired by Yorkshire hunters that would go after all sorts of prey, ranging from small rabbits to fox.

Not only were they reliable hunters of land animals, these Terriers were also prized as great bird retrievers. Sometime during the mid-1800s, many of these Terriers were bred with Otterhounds. The goal was to create a dog that had increased water hunting skills as well as a stronger sense of tracking. The result was a sharp looking dog that became excellent otter hunters.

These otter hunting dogs became the breed that we know of today referred to as the Airedale Terrier. Their name was actually called “Waterside Terriers” at first, but was changed to the Airedale in 1878.

Terrier enthusiasts began to show these dogs in ringside competitions. To further the appreciable beauty of the Airedale Terrier, they were mixed with both Irish and Bull Terriers. By the early 1900s, the well-known Terrier and champion “Master Briar” became the father of today’s Airedale Terriers.

Master Briar produced dogs that highly influenced the breed in the United States. They picked up popularity as strong hunters, proving themselves to be worthy at hunting big game.  However, after the end of World War I their numbers declined and today they are a rare breed to come across, yet their great reputation remains the same.

The Airedale Terrier is considered to be the most versatile of the Terrier dog breed group. They are adventurous, bold, and love to play. Highly intelligent and a bit stubborn, training may take some time. However, with the right amount of training time, these dogs are obedient, loyal, and make excellent watchdogs. And so long as the Airedale Terrier gets plenty of mental and physical stimulation, they can make obedient house pets.

Taking Care Of Your Airedale Terrier

Airedale Terrier dogs require a lot of exercise. Without enough physical exertion, they tend to get bored easily and can be quite destructive, if left alone inside the house. Long walks or active games should provide plenty of stimulation to can take care of these needs.

Airedale Terriers are able to live outside during cold climates but like all house dogs, it’s always best to have them sleep inside with the family. Grooming takes a bit of extra work than most breeds, due to its long wiry coat. A thorough combing 2 – 3 times per week is ideal. Clipping and scissoring is also recommended about every eight weeks or so.

The average lifespan for healthy Airedale Terrier dog is between 10 and 14 years. They are a very healthy breed in which CHD is the only major health issue that may come up. Minor concerns include gastric torsion and hypothyroidism.